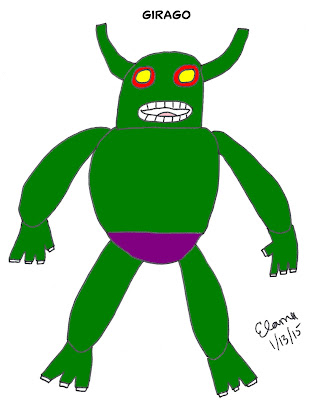 “RAAAAWR! Flee, puny Earthlings! I am Girago of the planet Goomador! I have arrived to conquer your planet and enslave the human race! Resistance is futile! Not even your Captain Satellite can save you from my awesome power! Soon, all of you shall bow before GIRAGO!”

Girago is an alien overlord who was deposed on his homeworld by the peacekeeping Sun Men of Planet G. Confined on the prison asteroid Gulaga, Girago broke out at the earliest opportunity and hopped aboard the first rocket he could scrounge up. Checking the starcharts for potential destinations, he decided Earth would be an easy mark for his comeback attempt.

On the up side for Girago, it turned out he TOWERED over humans. On the down side for Girago, he hadn't counted on Earth having superheroes. Since Girago's powers are limited to mighty strength, a nigh-impenetrable hide, and, er, being very loud, he was bested in battle by Captain Satellite and Shelly Ericson. Girago put up a terrific fight, but was no match for Cap and Shelly.

When last seen, Girago was hightailing it to his purloined rocket and blasting off for parts unknown. There are several possibilities regarding his whereabouts. He may have returned to Goomador, he could have retreated to Gulaga, or he might simply be biding his time before targeting Earth again. Wherever he is, we can rest assured of one thing - a lot of shouting is going on there.
Posted by C. Elam at 7:07 PM