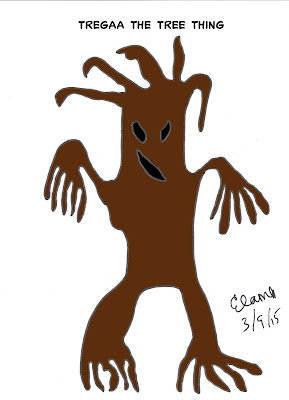 The lumberjacks of western Canada are a rugged, hardy lot. So when reports began coming in of some sort of monster lurking in the forests capable of withstanding axe blows, the authorities couldn't just shrug it off as a mass delusion. What the Mounties discovered when they investigated was the horrifying creature which called itself Tregaa the Tree Thing.

The exact origin of Tregaa the Tree Thing still leaves everyone stumped (no pun intended). And let’s face it, it’s hard to pry information out of a belligerent ambulatory tree if it doesn’t feel like sharing. We do know it was not seeking revenge for its fallen leafy brethren, if the propensity to toss around logs with reckless abandon was any indication. Truth be told, there was no apparent rhyme or reason to Tregaa's violence.

Conventional weapons were useless against Tregaa as it inexorably made its way to the U.S.-Canadian border. When Tregaa crossed over into the American Pacific Northwest, General Lee R. Falgout (Captain Satellite's contact in the military) got in touch with Paul Mann and suggested he should "whittle that giant toothpick down to size." Taking General Falgout's colorful language to heart, Captain Satellite and Shelly Ericson piled into the Rocket Racecar for a flight out west to timber country.

Tregaa's rampage was finally ended by Cap, Shelly, and a hastily-devised gadget christened the Hyperbolic Chainsaw. There was a concerted effort in the aftermath to gather up the chopped-up remnants of Tregaa, but the likelihood that some pieces of wood were overlooked is strong. Will the intelligence of Tregaa the Tree Thing persist in random splinters? Will the monster find a way to resurrect itself? You probably shouldn’t bet against it.
Posted by C. Elam at 7:10 PM