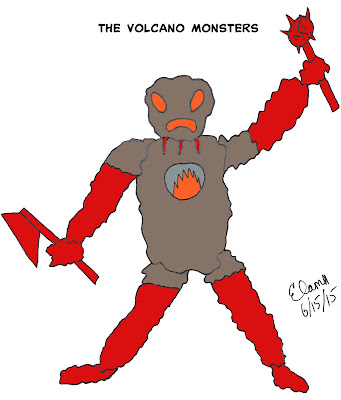 When the Invincible Alliance journeyed to Aska Island in the Aleutians to check on suspicious volcanic activity, they had no idea the case would change one of them forever. But then, they also had no idea what was causing the rumblings they were investigating. They learned the latter soon enough when they landed on Aska and the Volcano Monsters emerged from a smoldering crater.

No one is quite sure how the Volcano Monsters even exist in the first place. They are apparently semi-intelligent, rock-based beings that live within the planet's interior. Essentially, they are living volcanoes with fiery cores as their "hearts." They contain liquid magma as part of their physical makeup, and can shape this magma to form crude weapons. The logistics of all of this are positively mind-bending.

The Volcano Monsters immediately attacked the Invincible Alliance, perceiving them as a threat. The question of whether the creatures were truly evil or simply doing what came naturally occurred to all the heroes, but they had no time to address it while they defended themselves. Suddenly, the unthinkable happened! Firegirl took the full brunt of a Volcano Monster's magma blast and tumbled into the boiling lava below!

Not only did Firegirl miraculously survive this experience, but she somehow gained the ability to manipulate heat and fire through her own body. She used this newfound command of flame to help her colleagues drive their foes back into the Earth. Blue Behemoth and Drone Man would later theorize that the Volcano Monsters’ magma possesses special properties which interacted with innate alterations in Firegirl’s body chemistry due to prolonged exposure to her Pyro Pistol. Firegirl sort of nodded silently at this explanation. All she knew was she had the power to truly live up to her name.

The Invincible Alliance encountered only a small tribe of Volcano Monsters - less than a dozen. However, there is the very real possibility that others like them exist across the globe. Humanity would be well-advised to keep a wary eye out for future incursions onto the Earth's surface by these molten creatures.
Posted by C. Elam at 7:17 PM