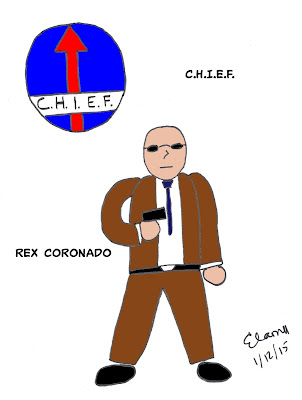 C.H.I.E.F. (Central Headquarters International Elite Force) is a civilian intelligence agency of the United States government which is primarily charged with investigating and, if necessary, addressing what are deemed “anomalous situations.” They are responsible for handling reports of UFOs, monsters, super-villains, and other paranormal events. Due to Third World's reliance on unorthodox tactics, C.H.I.E.F. has also been charged with containment functions in opposition to that subversive organization.

C.H.I.E.F. was formed in 1946 under circumstances which are still classified. It has been acknowledged, however, that C.H.I.E.F. is the successor to a branch of the government referred to only as “Department 27” in official documents. Department 27 was established at some undetermined point prior to the United States' entry into World War II. It is best known for its unique countermeasures against Axis weapons that were based on both super-science and sorcery.

C.H.I.E.F. has offices in major population hubs across the United States, and maintains bureaus in many nations. C.H.I.E.F. cooperates with other U.S. government agencies, and with intelligence services abroad. In light of a dearth of similarly-equipped forces specializing in paranormal occurrences, C.H.I.E.F. has been called into action on foreign soil on a number of occasions at the request of the country in question.

Though C.H.I.E.F. engages in numerous covert activities, its existence is well-known to the public at large, and many of its more notable cases have been widely reported in the press. The agency's heyday was during the bygone “spy hero” era, but it still plays a vital role in both national and global security. To this end, C.H.I.E.F. works closely with the new breed of superhero that has emerged in recent years.

Rex Coronado is the current executive director of C.H.I.E.F., and is based at their main offices in Pongo, Virginia. He answers to the President of the United States and the top secret Monarch-12 committee that oversees C.H.I.E.F.'s operations. The son of Mexican immigrants, he is deeply proud of the United States, and will fight to defend it with his last breath.

Rex had a distinguished career as a C.H.I.E.F. agent prior to his promotion, and has the scars to prove it. He wears sunglasses at all times to disguise the fact that he has a glass right eye, and walks with a noticeable limp due to shrapnel wounds. Rex is cantankerous seemingly beyond reason, but has been known to display a sharp sense of humor when least expected. Never one to be underestimated, he will do whatever it takes to accomplish his mission.
Posted by C. Elam at 9:08 PM