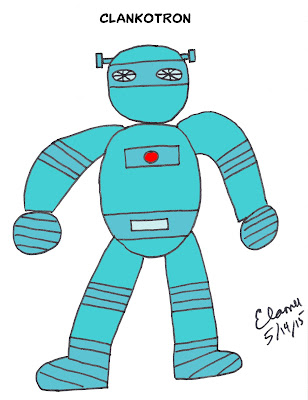 The creation of the Neptoid engineering team, Clankotron is a nigh unstoppable robotic juggernaut. In theory, anyway. Perhaps "junker" would be more appropriate, since Clankotron is perpetually on the blink and can often be found collecting dust in a corner of the Neptoid base on Neptune.

Make no mistake - Clankotron has shown devastating potential when it actually works. It is impervious to most conventional Earth weapons, and at least some unconventional ones, too. It is also fantastically strong, capable of reducing a structure to rubble in mere minutes. Clanko could be a huge asset to the Neptoids' plans.

The issue is that Clankotron breaks down. All. The. Time. To say Clankotron is seriously fubar is probably quite the understatement. For one thing, it might have been a mistake to put a large red button on Clankotron's chest that looks for all the world like it turns the robot on and off (because it totally does). This has further hindered Clankotron's effectiveness on those rare occasions when it is functioning properly.

The Neptoids debuted Clankotron right in the middle of Major City, near the posh Chez Café where Paul Mann and Shelly Ericson just happened to be having a leisurely lunch. Ergo, Captain Satellite and Shelly Ericson charged into battle, Clankotron's red button inevitably got pushed, and it was back to the drawing board for the Neptoid engineering team. Chez Café's owner/manager Manon Etienne was so delighted her restaurant avoided being wrecked in the conflict that she treated all her guests to a free mimosa. Cap and Shelly agreed that wasn't a bad way to end a case.
Posted by C. Elam at 7:13 PM