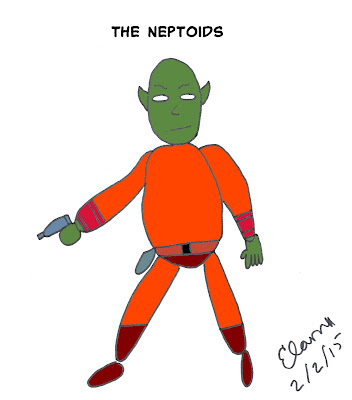 The Neptoids seen on Earth are an advance scout party sent by an alien armada intent on taking over our world. The Neptoids are not actually from the planet Neptune, but maintain a base there to better strike at us. The similar name, they insist, is purely a result of our poor Earthling comprehension of their language.

Given their daunting mission, the Neptoids are prepared to engage anyone who resists them. Their flying saucers (which look suspiciously like squished jack-o'-lanterns) are all well-equipped with deadly laser beams. Each Neptoid also carries a handheld laser weapon with settings that range from stun to kill. And then, there's Clankotron. Clankotron is a massive robot enforcer meant to tip the odds of any battle in favor of the Neptoid invaders. Sometimes, the bucket of bolts even works.

Unsurprisingly, the Neptoids have run afoul of Captain Satellite and the other heroes of Earth on more than one occasion. During the first such encounter, Cap and Shelly Ericson realized they were in love while they were held captive aboard a Neptoid saucer. No word on the Neptoids' opinion of the relationship, but the adventure didn't work out for extraterrestrial interlopers that day.

The Neptoids are dogged in their determination to conquer our globe, or at least set the stage for such a conquest. To fail would mean returning home having accomplished nothing. That probably wouldn't go over very well.
Posted by C. Elam at 8:45 PM