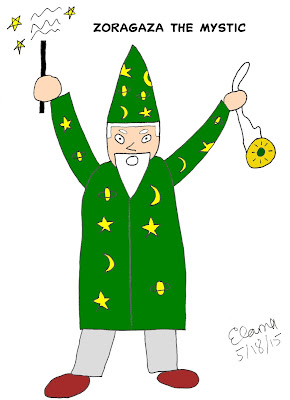 According to Zoragaza the Mystic, he is a centuries old wizard fallen on hard times. While this may indeed be the case, there are other, saner theories about him. What has been officially documented is his lengthy career as a con man plying his trade in carnival sideshows, seedy dives, and dilapidated storefront theaters.

Zoragaza's first brush with fame came a number of years ago when he fell in with the popular rock band the Scarys. He was hired to create illusions for a series of concert gigs for the group, and was even featured on the sleeve of their album Forest of the Sinister Mind. Zoragaza has since described his services during this period as that of a spiritual guru, but Scarys band leader Arthur Cudlip calls those allegations “bollocks” and characterizes Zoragaza as “a daft bugger.” Strong words indeed coming from Cudlip, who has been known to chew on light bulbs during his all-night benders.

Zoragaza's entertainment endeavors proved short-lived, and he found himself back in his more familiar environment. While at a pawn shop looking for money to purchase the cheapest wine that comes in a brown paper bag, he inadvertently acquired an amulet known as the Green Stone which grants its possessor powers of actual sorcery. Using the Green Stone for malevolent purposes, Zoragaza embarked on a public and colorful campaign of crime - including targeting his old mates the Scarys. That decision has led to conflict with the Invincible Alliance, much to his regret.

Is Zoragaza the Mystic truly an ancient magician reclaiming his lost talents? Or is he just an opportunistic carny with a new weapon and delusions of grandeur? Welllll...prevailing wisdom is that it's the latter, but there's always the chance Zoragaza is telling the truth. For once.
Posted by C. Elam at 7:13 PM