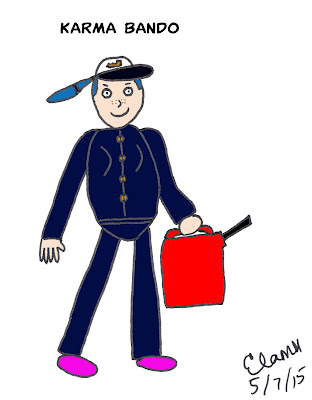 Don't let Karma Bando's hippie girl name and slight appearance deceive you - she is an ace auto mechanic and expert vehicle customizer. There was a lot of skepticism when she opened her Lightning Cars garage, but she dispelled it by being one of the very best. She's never been afraid of hard work or getting her hands dirty...and she's had to work twice as hard to get where she is today.

Paul (Captain Satellite) Mann enlisted Karma's aid in creating his Rocket Racecar, a scratch-built special order based on a classic Imperial Motors model. Just securing the exclusive contract enhanced Karma's reputation considerably, but her subsequent maintenance work on Cap's sweet ride bolstered that rep even further. Her association with Captain Satellite led directly to the deal to build and service the Invincible Alliance's Air Cars, another high profile job. Her renown has grown to such a point that she is looking into opening additional Lightning Cars locations. Not bad for a business that was once dismissed as "a surefire failure."

Karma lives alone (well, except for her cat Solly) in Major City's Violet Village neighborhood, and doesn't even stand out as unusual in that Bohemian community. In her spare time, she writes what she describes as "bad poetry" (it's actually pretty good) and paints in a wide variety of styles. In truth, Karma Bando has a gentle artistic soul. She has just chosen to express it primarily through repairing and altering automobiles.
Posted by C. Elam at 6:46 PM