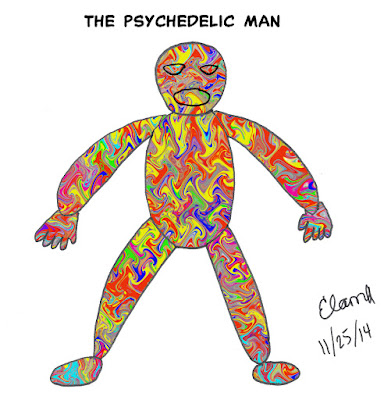 Dr. Clive Frye was considered a maverick among his fellow scientists at the Unterweyer Center, a research facility upstate from Major City. He had become obsessed with the wild idea of tapping into alien dimensions in the search for alternative fuel sources. The other researchers warned Frye of the dangers of tampering in areas he didn't fully comprehend, but he refused to be deterred.

It all went horribly wrong one day, and Dr. Clive Frye paid a terrible price for his hubris. What precisely happened - what Dr. Frye saw and experienced - remains unknown to this day. The result, however, was that “Clive Frye” effectively ceased to exist. In his place was a being that called itself “The Psychedelic Man.”

The Psychedelic Man is not human, but rather a type of organic color. His body is actually a largely translucent shell that contains his true form - a kaleidoscope of swirling and changing colors. He can alter his physical form according to his whims, and has displayed the ability to stretch and even split off body parts.

Clive Frye's mind was twisted by the process that transmuted him into the Psychedelic Man, and his chief goal now is destruction. He has clashed with the duo of Captain Satellite and Shelly Ericson, and with the Invincible Alliance. Though defeated and seemingly destroyed on several occasions, the Psychedelic Man has always returned.
Posted by C. Elam at 7:42 PM