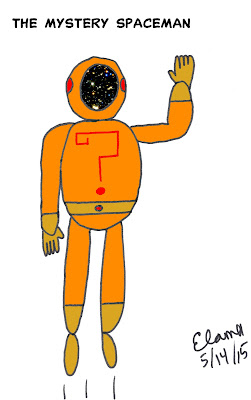 He first appeared in the skies of Major City one crisp autumn morning, and alighted atop the Mando Building. Captain Satellite and Shelly Ericson were called in immediately, and the Captain quickly dubbed the stranger “Mystery Spaceman” due to the symbol etched into his uniform resembling a question mark. Shelly is still annoyed her suggested name was shot down: “Space Face.”

It is unclear from available evidence if the Mystery Spaceman is some unconventional lifeform or if he (it?) is an artificial being used as a tool by the Astro-Giants. Certainly, the starfield that is the only thing visible behind the Mystery Spaceman's glass faceplate would seem to argue for the latter. The Mystery Spaceman can fly through the rigors of space unaided and survive, and is capable of tapping into the cosmos itself to unleash devastating blasts. Could a humanoid anywhere in the known universe do such things?


*EDITOR'S NOTE: The image used for the Mystery Spaceman's faceplate was found at Great Images in NASA. It is not protected by copyright.
Posted by C. Elam at 6:48 PM