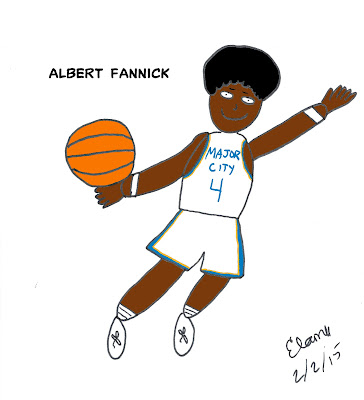 Albert “The Panic” Fannick is a 6' 9", 227 lb. basketball star who first rose to prominence at Collette College in the deep south. Signed by the Electrics after graduation, Fannick has gone on to have a sensational pro hoops career. Among his most astonishing achievements to date are scoring 88 points in a game against the El Oceano Liners, pulling down 50 rebounds versus the Middleburg Gears, and putting up a quadruple double (double digits in points, rebounds, assists, and steals) in defeating the Federalton Diplomats almost single-handedly.

As it turns out, Albert Fannick is Shelly Ericson's favorite player, and maybe the only person in the world ever capable of rendering her starstruck. They finally crossed paths when Fannick and Paul (Captain Satellite) Mann learned by accident that they shared the same physician, Dr. Benson Wong. Shelly was somehow able to keep her inner fan in check upon meeting her idol. The two hit it off, partially due to sharing similar backgrounds, and were swapping stories about growing up in country small towns like they were old friends in no time at all.

"The Panic" has amassed a considerable fortune, both for his prowess on the hardwood and through endorsements for such brands as Vica athletic shoes and Burger Chief fast food restaurants. However, Fannick feels passionately about giving back to his community, too. He donates both time and money to numerous worthy causes each year. His commitment is so strong that he even makes personal appearances in conjunction with Pallas Comeaux of the Tungsten Piledrivers, his fiercest on-court rival.
Posted by C. Elam at 6:53 PM