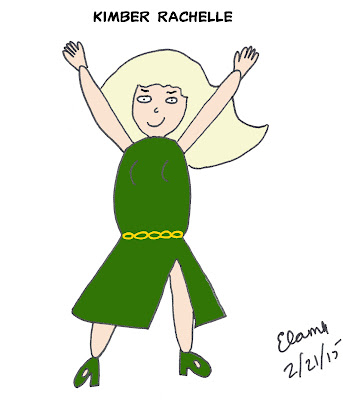 Kimber Rachelle (born Kimberlyn Matthias) is an almost famous actress based in Major City. Frustrated by a dead-end job at an Ancient Admiralty clothing store in her hometown of Rowen, New Mexico, she pulled up stakes and moved to Major City in pursuit of her dream of stardom. Kimber hasn't quite made it yet, but she is always working. She is currently best known for appearing in popular commercials for Burger Chief, Reinhold Beer, and (ironically) Ancient Admiralty.

Kimber got roped into the world of superheroes quite by accident. It began innocently enough when she was hired for a Captain Satellite TV special that was to be broadcast live on the DeKalb Network. What no one could have known was mad scientist Dr. Sandor Varkoff's plan to crash DeKalb Studios and interrupt the show as payback for the network ignoring his ransom demands. Varkoff unleashed his robot Elektroid on the set, and in the ensuing panic and confusion, Kimber found herself cornered by the automaton.

Instead of cowering in fear, Kimber attempted to reason with Elektroid. Amazingly, it worked! The robot's flawed design allowed it to realize that the human female was right and it was being used for evil purposes. Elektroid broke its original programming and turned on Varkoff, who was soon defeated by the combined forces of Captain Satellite, Shelly Ericson, and his own renegade creation.

Kimber Rachelle has remained in touch with Elektroid since that unconventional introduction. She is very soft-hearted and patient with the artificial being as he tries to navigate the intricacies of living among humans. She even refers to him as her “special friend." There are those close to them who wonder just how deep this friendship runs.
Posted by C. Elam at 7:58 PM