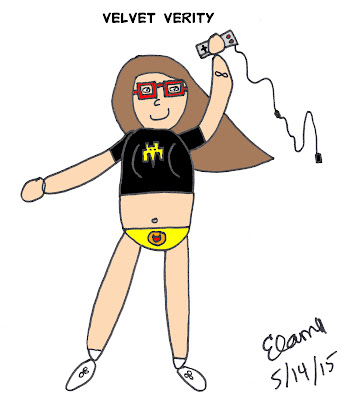 Model for "stag mags." Star of "blue movies." Dancer at "go-go clubs." El Oceano native Velvet Verity is all of these things, but none of them define her. She is an intelligent and creative woman who also happens to be an exhibitionist. It's just that her exhibitionist side makes her a good living.

Perhaps surprisingly, Velvet is also an unrepentant nerd. She is an expert video game player, and counts Riot Brawl (fighting game), Geddon Raiders (space shooter), and Hangly Man (maze game) among her favorites. She can speak at length about science-fiction movies like The Blue Ooze, Dirk Dixon - The Motion Picture, and Star Warp. But above all else, the Cat-Man franchise in all its permutations is her first love. She has even been known to cosplay as Kitten at conventions. It's quite a sight to see her decked out in full costume rummaging through the dealer tables looking for old comic books to add to her collection.

It was at Major City's World Comics Expo where Velvet Verity first met Paul (Captain Satellite) Mann. Both of them were in their regular clothes at the time, and neither realized who the other was. They struck up a conversation and quickly bonded over their mutual interests. It was only later that each of them learned who their new friend really was, and that led to further interesting conversations.

Awkward moments aside, Paul and Velvet are good buddies for people who live on opposite coasts. It raises a few eyebrows in the press now and then, but they've come to regard that as hilarious. Their relationship is strictly platonic, and Velvet has actually been a house guest of Paul Mann and Shelly Ericson on more than one occasion. For her part, Shelly loves Velvet - especially because she can explain the "nerd stuff" from a woman's point of view.

Velvet Verity realizes she has a finite shelf life in her assorted careers. After several years of performing in movies, she is currently embarking on her most ambitious project to date. For the adult film Confessions of a Naughty Nerd Girl, she will not only be acting in the lead role, but also writing, producing, and directing. Confessions of a Naughty Nerd Girl (which will co-star Mindy Locke, Diana Gunn, Gary Bluff, Roy Richards, and "Big" Dick House) may mark the turning point where people begin to take Velvet Verity seriously as an artist, and could allow her to transition into a broader range of opportunities.

In fact, Velvet has already been branching out, but that's strictly on the down low. For the last couple of years, she has been writing for the publications Fabulous Monsters of Movieland, Smash, and Bleep under her real name Jess Rodam. Few people even know that Jess (short for Jessica) Rodam is a woman, and almost no one is aware she's also Velvet Verity. Velvet/Jess has chosen to keep her two different identities separate for the time being, because she thinks there are many members of both her fanbases who just would not understand. And you know what? She's probably right.
Posted by C. Elam at 7:00 PM