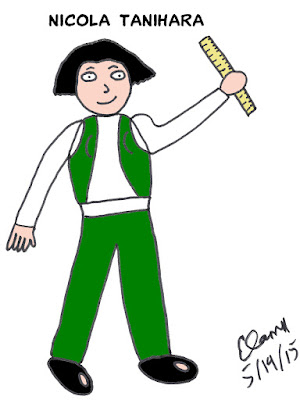 Nicola Tanihara first gained notice as one of the most brilliant and gifted graduate students at MTI. Among the people who noticed her were Mortimer Kane and Danny Graham, but neither of them had the nerve to talk to her while all of them were in school together. Eventually, Nicola completed her studies, and Morty and Danny went on to become Blue Behemoth and Drone Man of the Invincible Alliance.

More recently, Nicola joined the faculty of MTI after a stint at the prestigious Watkins University. She is an esteemed Professor of Mathematics at that institution of higher learning, and has had a several scholarly papers published in professional journals. She is considered a rising star in academic circles.

Nicola's credentials also earned her the attention of Third World. The subversive group made an attempt at kidnapping her, hoping to use her knowledge for their own nefarious ends. Luckily, Drone Man was able to foil this attempt, and, as a result, finally had no choice but to talk to her. This led to her asking him out, and there are even signs that sparks might fly between them.

Despite the perception that her chosen field is dry and boring, Nicola is known to have a goofy and sometimes even gross sense of humor. Seriously, if she asks if you want to hear the one about the banana and the monkey, be ready. Maybe that quirkiness is one of the reasons why she has taken such a shine to the admittedly-awkward Drone Man?
Posted by C. Elam at 6:57 PM