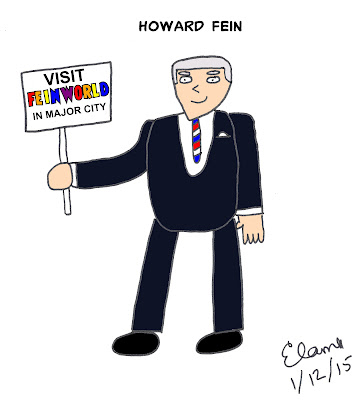 Howard Fein is a real estate mogul who lives in (and owns a fair chunk of) Major City. His prized property is the famous amusement park and tourist trap Feinworld. While the merry-go-round, bumper cars, and roller coasters are all cool, the main attraction of Feinworld is Sky Point - an imposing observation tower which offers one of the best unimpeded views of Major City. Sky Point keeps the turnstiles turning for Feinworld even in the off-season, and that makes Howard Fein a very happy entrepreneur.

The Superhero Boom has not passed unnoticed by Howard Fein. He is keenly interested in promoting superheroes, though whether his motive is idealism or pure profit is something only he knows for certain. It was Fein who convinced Captain Satellite to appear for a special Feinworld charity extravaganza, but the advertising for that jamboree ballyhooed Cap's participation even over the actual cause. Though he said nothing, Cap was more than a little annoyed by this turn of events. As for Howard Fein, the publicity left him eager to find a full-time Feinworld superhero.

To his credit, there have never been any serious accusations of impropriety brought against Howard Fein despite his position of considerable power. There are those cynics who claim he cannot possibly be as pristine as the image he portrays. Surely a man of his wealth and influence must have some skeletons in his closet? Well, no one has ever managed to dig anything up, and it hasn't been for a lack of trying. It's an open secret that lifelong bachelor Fein is involved in a relationship with his much younger secretary Bria Plotnik, though this hardly counts as scandalous in modern society. Perhaps Howard Fein really is that squeaky clean?
Posted by C. Elam at 1:04 PM