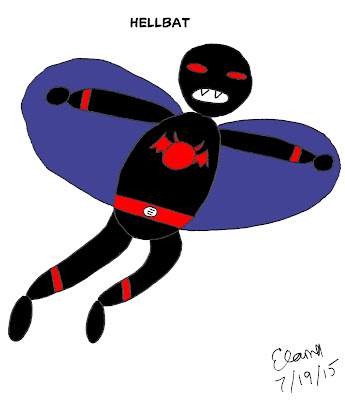 Hellbat (ヘルバット Herubatto), also known as Jigoku Kōmori (地獄コウモリ), is the top lieutenant in Third World's Japan Branch Dai San Sekai (第三世界). His origins are unknown, though he is apparently not one of the creatures cooked up in Dai San Sekai's laboratories. There is speculation he may be an alien, and could possibly even be a renegade connected to the mysterious group known as the Sun Men (サンメン). This might explain the Sun Men getting involved in the battle against Dai San Sekai by granting Atsushi Anzai (安西敦士 Anzai Atsushi) the powers to become the superhero Red Taiyo (レッド太陽 Reddo Taiyo).

Contrary to appearances, Hellbat is not a vampire. Though his fangs are absolutely authentic and not just for show, he has no need to drink blood to survive. Similarly, Hellbat has demonstrated none of the supernatural abilities or weaknesses commonly associated with vampirism. His powers seem to only be super strength, flight, and nocturnal vision, with a limited degree of imperviousness to injury thrown in for good measure. Hellbat can often be found lurking in the shadows, but this is strictly a matter of preference rather than out of necessity. He can operate just fine during the day, but feels he does his best (or is that worst?) work under a cloak of darkness.

The most famous case involving Hellbat was the time Dai San Sekai unleashed a horde of artificially-created "hellbats" (bright red and fiery hot) under his command. While Hellbat engaged Red Taiyo in a fierce duel, the Science Brigade (科学旅団 Kagaku Ryodan) obliterated his winged underlings with their giant Sparkolight Lens (スパーコライトレンズ) after photographer Kenta Chiba (千羽健太 Chiba Kenta) inadvertently uncovered the hellbats' vulnerability to high-intensity light. Red Taiyo vanquished Hellbat in their showdown, but the monstrous malefactor slipped away to fight another day.
Posted by C. Elam at 7:28 PM