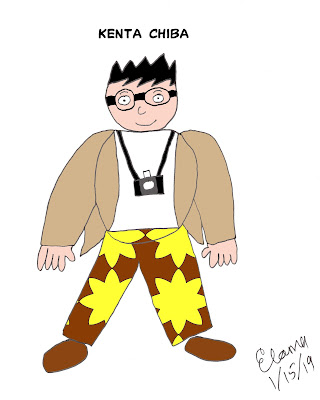 Kenta Chiba (千羽健太 Chiba Kenta) is a freelance photographer based in Japan. He's not exactly what you would call successful. Why? Well, to be honest, he's a bit of a bumbling buffoon. No matter how good he might be with a camera, that little problem has adversely affected his career advancement.

By virtue of being in the right place at the right time, Kenta Chiba has often been an eyewitness to fights between superhero Red Taiyo (レッド太陽 Reddo Taiyo) and monsters from the evil organization Dai San Sekai (第三世界; "Third World"). Chiba's pictures of these incidents have fetched him a tidy profit for the first time in his life. So naturally, he is motivated to tail Red Taiyo in the hopes of getting more valuable shots...oh, and assisting the hero, of course! Chiba sometimes even manages to be helpful, and the patient Red Taiyo considers him more of a friend than a nuisance.

In his shadowing of Red Taiyo, Kenta Chiba has also crossed paths many times with the Science Brigade (科学旅団 Kagaku Ryodan). Brigade commander Captain Makoto Yamada (山田誠隊長 Yamada Makoto Taichō) thinks Chiba is an idiot and not even a useful one, but tolerates him because his daughter Miharu Yamada (山田美晴 Yamada Miharu) has a soft spot for "Kenta-san." Chiba did assist the Brigade against Hellbat (ヘルバット Herubatto) when he accidentally discovered the villain's underling hellbats were vulnerable to high-intensity light. That's a point in his favor.

It is still unclear whether Kenta Chiba will be a hindrance or an asset in Red Taiyo's crusade against Dai San Sekai. When he's not out chasing heroes and monsters (and sometimes when he is), Chiba can be found snacking on assorted goodies purchased from street vendors. He is especially fond of corn on the cob.
Posted by C. Elam at 7:21 PM