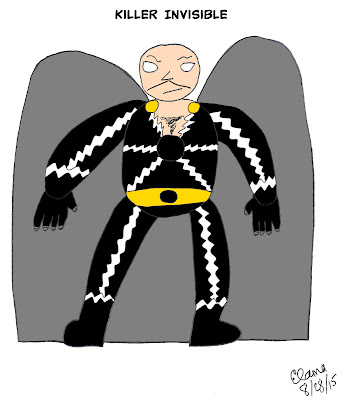 Bogey Robiere was a notoriously foul-tempered clerk and self-described smut peddler at Grampy's Newsstand, the most famous adult bookstore in all of Major City. He was also stabbed to death three years ago during a bar fight at Ron's Barn, a watering hole not far from Grampy's. So how is the new super villain Killer Invisible a dead ringer for Bogey Robiere?

The simple answer is Killer Invisible is a clone of Bogey Robiere. It turns out Bogey was a Third World agent all along, and that subversive group maintains DNA samples of all its members in case of emergency. After creating a copy of Bogey during the testing of a new cloning apparatus, Third World was left with what to do with the doppelganger. He was given the codename Killer Invisible and instructed to test the experimental Zero Suit, a stealth uniform which grants its wearer total invisibility.

Killer Invisible rather brazenly posted a list of 33 (!) planned targets for robbery on the front door of the Major City Police Department headquarters. He also promised he would bump off Captain Satellite at the conclusion of his crime spree. Well, Killer Invisible only made it through the first three items on his list before Cap apprehended him. Killer Invisible did try to make good on his promise and live up to his name with a concealed knife, but a right hook from Shelly Ericson spelled the end of that and the villain's evening in general.

Killer Invisible is incarcerated at Phipps Prison as the courts try to figure out how to deal with a person who doesn't actually exist. The Zero Suit is in storage there along with other super villain paraphernalia. Oh, and Third World? The cloning apparatus blew up during its next test and took out its inventor Armand Zella in the process. No more clones for them.
Posted by C. Elam at 7:40 PM