When we last left this series, it was April 2007. I had just created a massive multi-character picture which incorporated many Captain Satellite-related heroes and villains. So naturally, the next appearance of Cap in my DeviantArt gallery was...August 2007?!?? 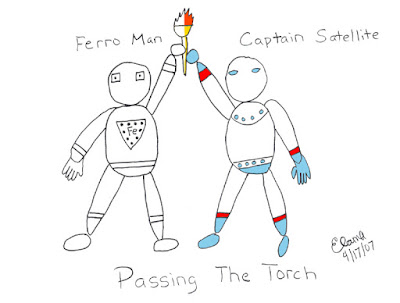 So...what happened? Well, I suppose I should first explain the title and rationale for the piece seen here. "Passing the Torch" was posted on August 12, 2007. Its original intent was to signal a transition in my gallery. You see, since that crowd scene from last time, I had been concentrating heavily on my childhood characters. By August, I was finally ready to get to the Captain Satellite-themed crew.

I say "original intent" because this picture took on a greater significance as time passed. Though they occupied me a lot during the summer of 2007, my "Legion" characters from elementary school faded into the background from this point forward. They never quite went away, but this was the last time they ever took center stage in my imagination.

As it turned out, August was optimistic about the Captain Satellite era beginning. I didn't start posting individual characters until October 2007. There were a total of sixteen pieces uploaded through December of that year. Many of them had proto- versions of the profiles, but I was just as likely to give no background at all besides explaining the creative process. It was still the early stages of this enterprise.

And then...silence. Sorta. I was still heavily involved in Return of Jetman during this period, so I turned my attention back to it in the hopes of completing the story still in progress. That didn't happen until 2010, and it's probably not a coincidence that was the same year Cap and company came roaring back to life.

I didn't forget Captain Satellite during 2008 and 2009, even though I had a lot of other things on my mind. There were a couple of projects which were planned, but never materialized. There's not much in the way of tangible evidence of them today, but trust me, they were real and could have been great. It's just that life had other plans...

Which takes us to 2010. This very blog had been in existence for a year, and I was looking for fresh content. I decided my superhero universe would be a good candidate for inclusion, and I began trotting out the 2007 stuff with a few tweaks here and there. This led to people asking me if I had something in mind for the characters now that I had dusted them off. Truthfully, I did not at the time, but the level of interest got me thinking.

What followed was some commissioned artwork, which led to another commission. Then I wrote the first prose story featuring Captain Satellite, conceived and completed in a single day. Before I knew it, I was writing more profiles and creating new characters and commissioning more art from extremely talented people. In a few months, the project was an actual project and even had a name coined in the comments of a blog entry - "the Owariverse." 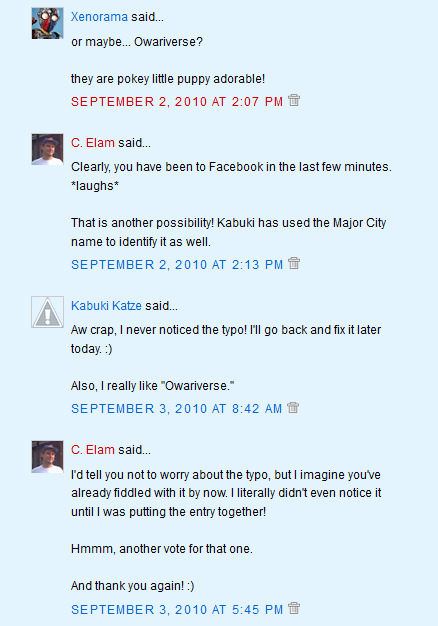 (You can read the original entry, and these comments in their current formatting, at this link.)

This more or less wraps up the "history" portion of the Owariverse chronicles. Expect to see my vintage Owariverse art (2007-2012) in the months ahead. Meanwhile, just because this series has concluded, that doesn't mean there won't still be behind-the-scenes tales to tell.