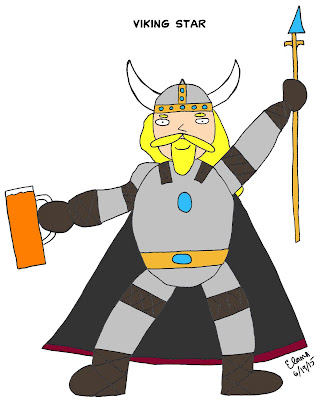 Bjørn Stargård is a burly, bellowing braggart and brawler. He is also one of the most notorious cosmic raiders in the known universe. That reputation has earned him the name Viking Star in his travels through space.

Viking Star hails from Nordex, the frosty northern polar region of the planet Oraygion. As Nordex is a land of ice and snow, its residents are specially adapted to the rigors of life there. The striking superficial similarities between Nordexians and the historical Vikings of Earth remain unexplained to this day.

Though he is technically a pirate, Viking Star tries to limit the spaceships he boards to those of belligerent, warlike groups such as the Neptoids. He might be a scoundrel, but he does have a bit of a conscience. Quite frankly, he's more interested in gorging on food, drinking mead, and carousing than looting anyway.

Viking Star plies the spaceways in a fully-armed vessel christened The Galactic Drakkar, which looks uncannily like an Earthly Viking ship. It even has a dragon head on the prow. The Galactic Drakkar contains an arsenal of weapons Viking Star can use in his plundering. The Stellar Spear is probably his favorite, and he is rarely seen without it. Like all of his armaments, the Stellar Spear is powered by "Jadoo," the mysterious force no one outside the planet Oraygion can understand.

Earth would have been of no consequence to Viking Star, except for the fact that Princess Nikatonia has found her way here on more than one occasion. Viking Star harbors an enormous crush on the princess, and is forever trying to win her affection. For her part, Nikatonia has spurned his overtures, going so far as referring to Viking Star as a "drunken oaf!" This has done little to dim the ardor of the pillaging powerhouse as he continues his pursuit of her.
Posted by C. Elam at 10:01 AM