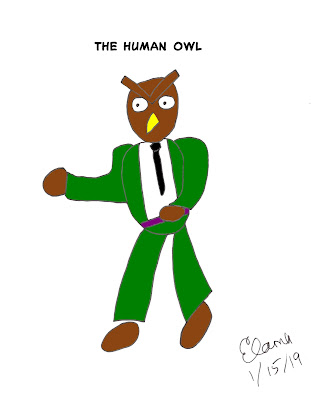 The legend began in 1940, on the Parallel Earth where Thunder Man had reappeared to the world the year prior. A cult of masked men styling themselves the Parliament of Owls was hunting down and killing known criminals on the streets. Private investigator Abel Wyler, falling for the pleas of a young woman whose older brother had worked as a bookie before being gunned down by the Parliament, was on the trail of the group when he confronted one of its members and subdued him after a vicious fistfight. Stealing his opponent's owl mask, Abel Wyler infiltrated the Parliament of Owls and brought an end to their reign of terror from within their very ranks.

At the conclusion of the case, Abel Wyler was musing over his newfound owl mask. Though they had gone entirely too far, there was something to be said about the Parliament of Owls' methods in pursuing justice. What if...what if he continued to wear the mask in a crusade against crime? He could trade on the Parliament's deadly reputation while using non-lethal means to catch those wrongdoers who were just out of reach of the law. On that day, the Human Owl was born.

Of course, there was the small matter of the Human Owl being wanted for murder due to his co-opting of the guise worn by the Parliament of Owls. Those charges were finally dropped when Abel Wyler took Inspector Leon Adwell into his confidence and explained his origin in detail. From that day forward, the Human Owl was a valuable and trusted ally of the police.

Over the ensuing decades, the mantle of the Human owl has been passed down from one generation of Wylers to the next. The current Human Owl is Phineas Wyler III, and to say he didn't see that coming is quite the understatement. He literally had no idea his father Phineas Wyler Jr. even was the Human Owl until relatively recently! Phineas Jr. had kept the secret hidden because he had no confidence in his artist son's ability to carry on the tradition and was holding out hope of finding a worthier successor. That unfortunately didn't happen before Phineas Wyler Jr. came down with a fatal case of the croup. His deathbed confession to Phineas Wyler III ensured that the Human Owl will fight another day. The question is, just how effective can he be if his own father couldn't believe in him?
Posted by C. Elam at 8:42 PM