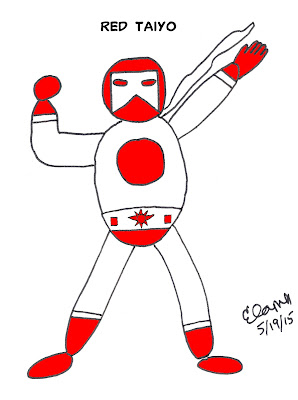 Red Taiyo (レッド太陽 Reddo Taiyo) is secretly Atsushi Anzai (安西敦士 Anzai Atsushi), an associate lecturer of astronomy at Japan’s Jonan University (城南大学 Jōnan Daigaku). Returning home late one night, Anzai's motorcycle disappeared into a burst of light. He found himself in another dimension and was greeted by three mysterious beings who introduced themselves as the Sun Men (サンメン). The Sun Men, emissaries of the peaceful Planet G (プラネットＧ), bestowed upon Atsushi Anzai both a henshin (変身; "transformation") belt and a mission: fight for his homeland and the entire world against a force of darkness on the horizon.

Restored to the normal plane of existence, Anzai took his newfound purpose to heart and created the identity of Red Taiyo (“Red Sun”) with his henshin belt. He uses the innate powers of the belt to transmute his standard bike into a sleek machine dubbed Solarflare (ソーラーフレア). Red Taiyo utilizes Solarflare and his enhanced strength, reflexes, and agility to fulfill his promise to the Sun Men. He is unsure why he was chosen by his extraterrestrial benefactors, but Red Taiyo is determined not to fail.

The "force of darkness" predicted by the benevolent Sun Men soon became apparent when a newly-formed Japan branch of the subversive organization Third World emerged. Dubbed Dai San Sekai (第三世界; "Third World"), this group has an apparent army of monsters at their disposal. Fortunately, Dai San Sekai has so far been as effective as their Western counterparts. Also similar to the main office, no one is quite sure who is in charge. Though a few of their lieutenants have opposed Red Taiyo, the brains of the operation has proven to be nebulous.

The Japanese government, not content to entrust their country's safety to the untested Red Taiyo or outside forces like C.H.I.E.F. and American superheroes, has recently formed an elite task force to combat Dai San Sekai and other paranormal threats. Designated the Science Brigade (科学旅団 Kagaku Ryodan), this task force commanded by Captain Makoto Yamada (山田誠隊長 Yamada Makoto Taichō) is comprised of highly-qualified specialists in a wide range of fields. The Science Brigade has assisted Red Taiyo in battling Dai San Sekai, but there is an understandable rivalry between them and the hero. Complicating matters somewhat is the mutual attraction between Atsushi Anzai and Science Brigade member (and the Captain's daughter) Miharu Yamada (山田美晴 Yamada Miharu).

Red Taiyo is trailed in his ongoing crusade against Dai San Sekai by Kenta Chiba (千羽健太 Chiba Kenta), a bumbling freelance photographer. Chiba does his best to be helpful, and sometimes even succeeds. Whether he will prove to be a hindrance or an asset in Red Taiyo’s mission has yet to be determined.
Posted by C. Elam at 7:01 PM