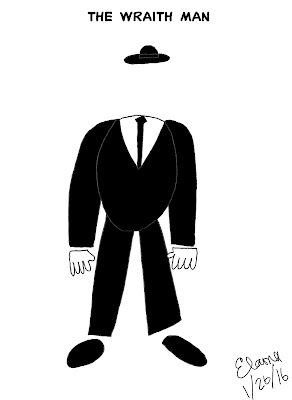 The Wraith Man was originally posted February 15, 2016. The idea here was an "urban legend" style of character. Upon reflection, though, I couldn't come up with anything to actually do with the Wraith Man. The concept was limited and static, and there was some redundancy with better-established characters. So the Wraith Man was dropped from the lineup during this revamp.
Posted by C. Elam at 3:15 PM

Email ThisBlogThis!Share to TwitterShare to FacebookShare to Pinterest
Labels: apocrypha, my art