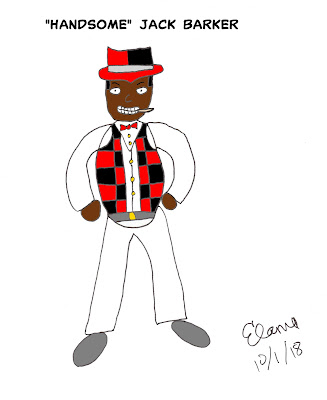 "Handsome" Jack Barker is a flamboyant hustler who is a fixture in the expansive Major City neighborhood known as the Minors. Despite having no visible means of support (i.e., no real job), he gets along just fine. It's assumed he makes a living at the billiards tables and by playing card games like poker, blackjack, and most especially Bourré. It certainly isn't through shadier means, because that would go against Handsome Jack's character.

You see, though some might consider him an unsavory sort, Handsome Jack is actually a decent guy. He even eschews running obvious cons and makes his bones through his own skill and shrewdness. He is well-liked and well-respected throughout the Minors for his honesty and fearless good humor, and he seems to know everyone and everything in that part of town. It is said if you want to know something about the Minors, talk to "Handsome" Jack Barker.

So that's exactly what Urban Nightmare did. Handsome Jack has proven to be a reliable and trustworthy informant for the crimefighter since he began his crusade to protect the citizens of the Minors. Though he fully supports Urban Nightmare in his efforts to clean up the area, Handsome Jack keeps that fact low-key for his own good. He does have a reputation to protect on both sides of the battle, and it's in his best interest to give the appearance of being a disinterested observer.

Oh, the nickname? Handsome Jack gave it to himself. After all, he is extremely handsome. Just ask him.
Posted by C. Elam at 8:21 PM