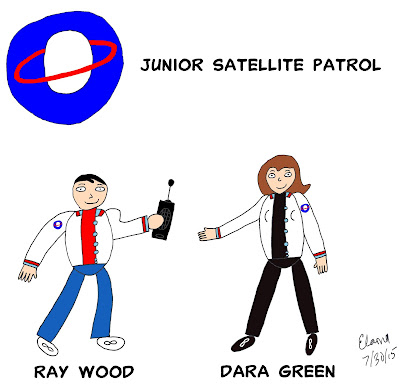 Ray Wood is the current president of the Greater Major City Chapter of the Junior Satellite Patrol. Ray is a hardworking and dedicated young man who takes his role as a leader seriously. His biggest disadvantage right now is inexperience, but he is learning more and more every day. To be quite honest, he might already be more capable than Captain Satellite as far as the hero bit goes.

Dara Green was a teenage runaway from the Midwest who had fled her widowed father after he'd beaten her up one too many times. She had wound up on the streets of Major City and gotten mixed up with Trey Dreier and his Third World Boys Auxiliary. Aghast over her situation, she happened upon a Junior Satellite Patrol flier on a streetlight pole and called them collect on a payphone. Ray was manning the phones at the time, and he not only accepted her call but did his best to convince Dara there was a way out. Unfortunately, he couldn't get help to her in time before Dreier discovered her attempt to escape his influence.

Ray Wood insisted on accompanying Captain Satellite and Shelly Ericson to Armory Island, the site of the Third World Boys Auxiliary's secret base. Dara managed to free herself through her own ingenuity, and she assisted Cap, Shelly, and Ray in capturing Trey Dreier and dismantling the Boys Auxiliary. In the months that followed, after Dara was cleared of all outstanding charges in juvenile court and had won emancipation from her father, she joined the Junior Satellite Patrol herself - sponsored by none other than Captain Satellite and Shelly Ericson.

Perhaps unsurprisingly, Ray Wood and Dara Green have fallen head over heels for one another. Their budding romance makes both of them very relieved Dara found guardians other than Ray's parents. Whether this is just puppy love or the beginning of something deeper remains to be seen. However, Ray and Dara have already forged a bond that can never be broken.
Posted by C. Elam at 8:38 AM