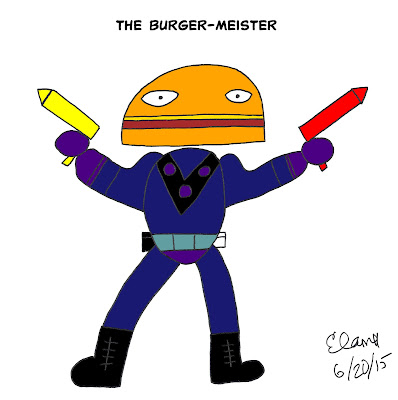 The villainous creature known as the Burger-Meister is a product of Dai San Sekai, Third World's Japan branch. After glimpsing monster-busting hero Red Taiyo in action, the Burger-Meister exercised the better part of valor and fled for less hazardous conditions. He made his way to a freighter bound for the United States and hid amidst a cargo of language books, vinyl monster toys, and life-size love pillows. When his slow boat to America arrived in port in El Oceano, the Burger-Meister hopped off to embark on a solo career of evil.

Contrary to appearances, the Burger-Meister's head is not really a giant cheeseburger. It is composed of the same artificial material as the rest of his body, only specially-developed for visual effect. The Burger-Meister has no super powers other than his ability to disguise himself as a normal human. Instead, he is armed with the Ketchup Burp Gun (automatic weapon), the Mustard Gas Gun (actually knockout gas), the Salt Shaker (vibratory lock pick), and the Pepper Sprayer (inflammatory agent).

The Burger-Meister's biggest splash came when he blended into a lineup of mascots at El Oceano's traditional New Year's Day Prune Picker Parade and commandeered one of the floats. He pushed aside the Grand Marshal, Cat-Man star Bruce Chase, and crowned himself King of the Parade. Unfortunately for the Burger-Meister, the crowd included Beth Gordon and Kendal Rose, both of whom could do something about his rampage. This led to the first-ever team-up of Muscle Woman and Amazing Girl to smash the Burger-Meister's ambitions. The two heroines then attended that celebrated college football game the Prune Bowl together (the whole reason Kendal was in town in the first place) and cheered on their respective schools as the El Oceano State University Toros took on the Eastern Midwest University Condors in the annual pigskin classic.

As for the Burger-Meister, setbacks like getting smacked around won't stop him. When he's not out creating criminal mischief, he works at menial jobs that don't do very thorough background checks. His alias of choice is the ever-so-clever "Paddy Berger."
Posted by C. Elam at 8:33 AM