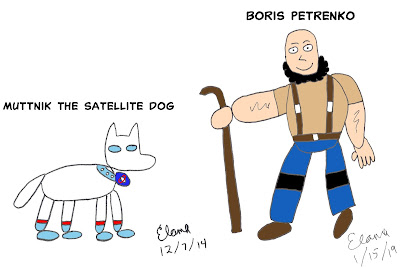 Boris Petrenko (Борис Петренко) is a Russian inventor and semi-retired aeronautics engineer currently living in Pongo, Virginia. At one time, he was heavily involved in the space program and maintained an office in Federalton. Today, he is content to tend to his garden and work on occasional special projects for C.H.I.E.F. as a paid consultant.

One particular project that captured Boris' imagination was C.H.I.E.F.'s effort to duplicate Captain Satellite's powersuit in their own laboratories. After devoting himself to the task, he felt he had developed a reasonable facsimile of the technology. The trouble was, how to test it? The project was classified, and finding a subject to wear the unproven suit would involve bringing someone else in on a "need-to-know" basis. Petrenko himself was out of the question due to his advanced age and chronic poor health.

The solution came in the form of Muttnik (Муттник), Petrenko's beloved pet. Muttnik is an East-European Shepherd Boris acquired as a puppy on a recent journey to Russia. He had named the dog "Muttnik" in a fit of whimsy, but the more he considered it, the more the idea of making the moniker a self-fulfilling prophecy intrigued him. After all, Muttnik could be trusted above and beyond any human.

Thus was born the legend of Muttnik the Satellite Dog! Boris tailored the prototype powersuit to doggy dimensions (it will stretch as Muttnik grows) and programmed it into a special Digital Collar. Muttnik, an exceptionally intelligent dog, can activate the suit by pressing a button on the collar with his paw. The suit not only mimics the design of Captain Satellite's, but duplicates its basic functions as an exo-skeleton capable of flight.

Muttnik earned his stripes as the Satellite Dog when he apprehended a cadre of Third World agents who were assaulting Petrenko. Captain Satellite has even endorsed his canine counterpart, going so far as gifting the heroic hound with a tag identical to his belt symbol. For his part, Muttnik is ready to answer any call to action, but is perfectly happy playing fetch with his master on lazy afternoons, too.
Posted by C. Elam at 8:47 AM