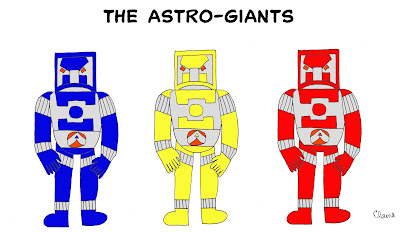 From the far reaches of outer space, they come to planet Earth. They are...THE ASTRO-GIANTS!

The Astro-Giants are a race of phenomenally powerful cosmic beings who have taken an interest in our world. They have never acted in a way that indicates a reason for their presence during their infrequent visits. They have quite forcefully repelled interlopers who approached them, but have also prevented natural disasters such as a massive tidal wave that threatened El Oceano. Mostly though, the Astro-Giants have merely observed human activity and then departed. It is entirely possible their intentions are completely alien to our understanding.

An unusual footnote with regard to the Astro-Giants is that, apparently, their arrival was foretold in an old pulp magazine. The April 1950 issue of Stunning Stories included a short story by Hiram Donnelly entitled "The Voice from the Stars" which uncannily predicted the coming of aliens very much like the Astro-Giants. Donnelly offered no insight into the inspiration for the tale to his editor, and was found dead of an apparent heart attack at his typewriter several months later. There are those who wonder if Hiram Donnelly knew too much and was "dispatched" by outside forces.
Posted by C. Elam at 9:12 AM