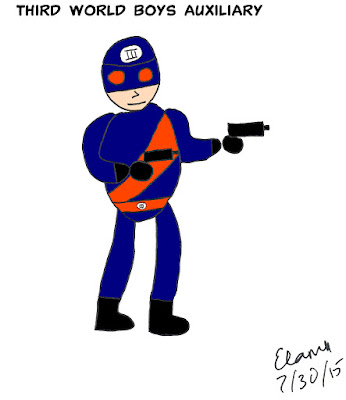 It would be a mistake to characterize Trey Dreier as a typical Third World agent. No, unlike the average Third World grunt, "Trey Dreier" (an assumed name) had a vision. His idea was to bring juvenile delinquents and other street kids under the influence of his subversive organization and get them started early in fighting for the cause. With the approval of his superiors, Dreier's Third World Boys Auxiliary did exactly that.

The Third World Boys Auxiliary maintained its recruiting office in the Minors under the auspices of a youth shelter called Third Chance. Though many members of the community had their doubts about Dreier and Third Chance, no one could prove anything shady was going on there. That all changed when runaway Dara Green found herself tangled up in Dreier's web of unsavory activity. Desperate to escape, Dara had called the Junior Satellite Patrol collect on a payphone and explained her plight to Patrol president Ray Wood before getting caught by the manipulator Dreier.

Acting on Ray's tip, Captain Satellite (without Shelly Ericson due to a quarrel between them) and Urban Nightmare sought out "Handsome" Jack Barker for information on the Third World Boys Auxiliary Dara had mentioned. Since Handsome Jack knew everyone and everything in the Minors, he realized instantly it had to be Third Chance, and Cap insisted on venturing there alone. This almost cost him his life, as Dreier and his charges had booby-trapped the place before clearing out. Only the timely arrival of Shelly in the Rocket Racecar (with Ray Wood along for the ride) saved Cap from a massive explosion.

Captain Satellite had learned through mysterious means that the Boys Auxiliary had relocated to their secret base on Armory Island off the coast. The trio flew into Armory Island to take on Dreier and his disciples, and gained another ally when Dara escaped captivity without even being rescued. When the smoke cleared, Cap, Shelly, Ray, and Dara had triumphed over the combined might of Trey Dreier and the Third World Boys Auxiliary.

Trey Dreier is currently incarcerated in Phipps Prison. His Boys Auxiliary has been broken up, and its members scattered throughout various jurisdictions. However, should Dreier ever get out of jail, it seems inevitable he will try to rebuild. The question is, will Third World let him?
Posted by C. Elam at 8:42 AM