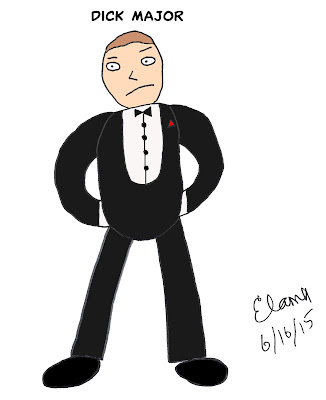 In the 17th century, Increase Major established the settlement which would one day grow into the modern day Major City. The Major family became a fixture in the city named for them, and their power, wealth, and influence has spanned multiple generations. Historically, they have been among the most prominent citizens in not just Major City, but the entire world.

Dick Major is not exactly the highlight of the Major family tree. Playboy, dilettante, spoiled brat - really, take your pick of the way you'd like to describe him. Unlike his uncle, the late Miles Major (widely-regarded as a generous and beloved figure), Dick has not earned a lot of friends or even respect over the years. He's the sort of person who thinks his money and standing entitle him to whatever he wants. You can imagine what that's done for his popularity.

Dick Major somehow convinced a woman to marry him in spite of his sparkling personality. Fanny Major is a gorgeous model who has become a regular on all the "World's Most Beautiful Women" lists. She is also an admitted trophy wife with no genuine affection for her husband. Fanny's in it for the riches and prestige, and Dick knows that. He figures it's worth it.

Though the rest of his clan has either embraced or at least accepted Paul (Captain Satellite) Mann, Dick resents what he feels is the diminishing of his family's legacy due to Mann's rise in stature in Major City. He refuses to accept what he sees as the devaluing of the venerable Major name, never considering his being an arrogant layabout does far more harm to it than Paul Mann ever could. He has toyed with the idea of using unethical or even illegal means to drag Mann down. The only catch is his all-consuming fear of being caught.
Posted by C. Elam at 8:26 PM