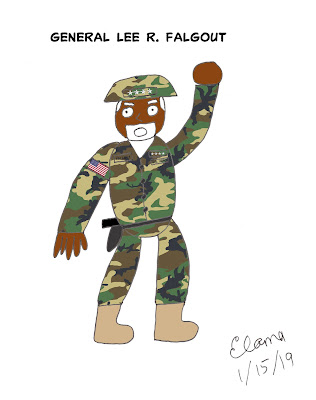 General Lee R. Falgout is a four-star general in the United States Army and a member of the top secret Monarch-12 committee which oversees C.H.I.E.F.'s operations. In the latter capacity, he has access to information on unusual events which he has been known to pass on to Captain Satellite as Cap's contact in the military. Should General Falgout really be doing that? Well, who's going to tell him to stop?

It must be noted that General Falgout acting as a source for Captain Satellite is not simply a case of the officer playing by his own rules. A couple of years ago, the general was visiting American troops in the desert nation of Bakhtar when they were ambushed by the forces of Third World. Only the timely intervention of Captain Satellite and Shelly Ericson flying into the fray in the Rocket Racecar prevented a disaster. General Falgout got to see Cap and Shelly in action firsthand, and he was duly impressed. He made a vow that day to help them in any way he could in the future out of gratitude and respect.

Though he is currently involved primarily in administrative duties, General Falgout is a combat veteran who has served with valor. Advancing age has done nothing to slow down the general - he is just as high energy as ever. He feels no need to be boastful about it, but anyone paying attention can tell that General Lee R. Falgout is still more than capable of kicking butt if a situation requires him to deliver a butt-kicking.


*EDITOR'S NOTE: This picture utilizes patterns from Free Camouflage Patterns for Illustrator & Photoshop by Spoon Graphics. The following public domain images at Wikimedia Commons were used in the creation of this picture: File:Flag of the United States.svg and File:US-O10 insignia.svg.
Posted by C. Elam at 8:14 PM