And last, but certainly not least in our birthday giftart-athoon is Sean Moore's delightful chibi version of the Canadian superhero the Penguin! I love how wee and fierce he is. Sean managed the impressive feat of making this guy both adorable and badass, and I love him for it.
Posted by C. Elam at 10:43 PM No comments: 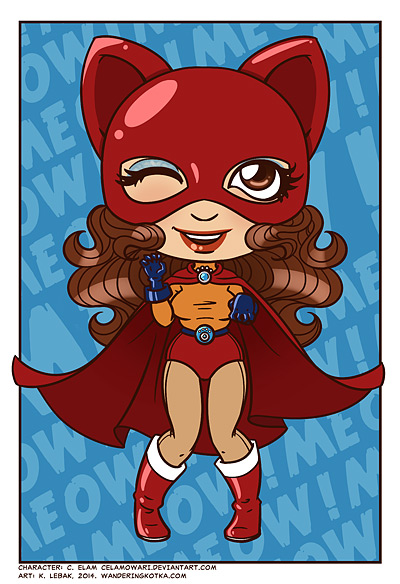 Wandering Kotka, the artist formerly known as "Kabuki Katze" here, there, and everywhere, delivered this adorable chibi portrait of Kitten as a birthday gift for me. Amazingly, all the Kitten love this year was a coincidence, too! Who knew?!?!

K is one of our steadiest co-conspirators here at OWARI. Be sure to show her some love! And while you're at it, let's get her Facebook page to 100 fans! I believe in you guys!
Posted by C. Elam at 10:11 PM No comments: 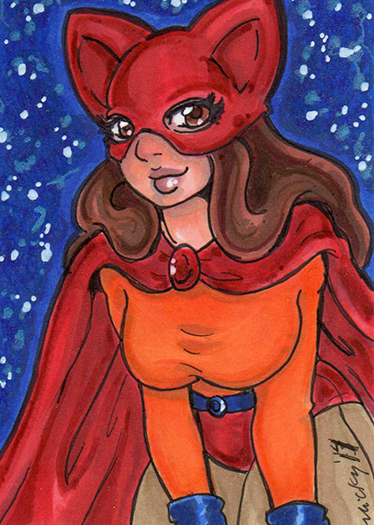 My 42nd birthday was this past Friday (yay?), and of course, I didn't blog about it. That may be just as well, hahaha. But I had a wonderful day, and received several pieces of giftart from my talented friends to mark the occasion. This week, I'm going to share those pieces with you.

Today, I am featuring a Kitten ACEO by the fabulous and sweet Nicky Flamingo. Nicky and I are essentially birthday buddies, because hers falls the day after mine. So please, enjoy her fantastic artwork and wish the lady a (now belated!) happy birthday!
Posted by C. Elam at 7:54 PM No comments:

There are days like today when you are doing your best to live in the moment when suddenly...


It's 1982. I'm in the town of Eunice for some reason, and we stop at a drug store. There I find a copy of Justice League of America #207. I feel like I've uncovered pirate's treasure, since I had earlier that year purchased All-Star Squadron #14. The Justice League book is Part 1 of a 5 part story, and the All Star book is Part 2. I resolve that I will need to return to this drug store in the future if such finds are to be made there. I never do. It's probably a bit late to think about making the trip.

It's 2012. I've been chosen for jury duty the week of my 40th birthday. This feels like I've been sentenced to hard time for the crime of having my name randomly selected. I sit in a jury room arguing with total strangers on that birthday, ruminating silently that this may turn out to be the worst in my litany of disappointing birthdays. Only time will tell if that's true.

Now it's 1991. A different birthday. For some reason, ENTERTAINMENT TONIGHT runs a feature on GODZILLA VS. KING GHIDORAH on their program. This despite the fact that the film will never play theatrically in the United States, and will only receive a video release years later. I am uncommonly excited by this, and even tape the show when it airs on a different station that night. I watch the show so much over the years that I can still tell you the forgotten Emilio Estevez/Mick Jagger co-starring effort also previewed therein (it's FREEJACK).

I don't even remember the year. I know I'm on a payphone when I call her. I don't even recall why, but I could hear her smile over the lines as we talked. Neither of us know that in the not-too-distant future, she will grow to hate me. For that moment, at least, we are just happy to hear the other's voice.

It's 2007, and I am hopelessly lost in Houston. A friendly older gentleman in a cowboy hat is getting coffee, and I ask him for directions. He sets me on the right track, and I make it to the airport with plenty of time to spare. It turns out to be one of the greatest days of my life. None of the heartaches in the ensuing years will ever change that fact, or that weekend.

Back to 1986. It's a crazy hot summer day. I am sitting in the parking lot of Bookworm's Apple with my copy of Crisis on Infinite Earths #12, the conclusion of DC Comics' giant maxi-series. I am ready for it to be finished, for a lot of different reasons. I have no way of knowing that it is the beginning of my long, strange trip to disillusionment with comics. I further have no way of knowing that in a few years, Bookworm's Apple will be gone forever.

It's 1994. I am walking across the bridge on my college campus. I am talking to the girl I've silently had a crush on for the last two years. Every part of me is screaming to tell her, at least to have the peace of mind that I got it off my chest. I don't. I let her walk away, all the while thinking that I will never see her again. I never have.

This is 1996. This is the day I found out I would lose my job when a secretary asked me when I was returning my contract and I had to tell her I hadn't received one. I'm not sure how I held that humiliation in without breaking down right there, but I did. Later, I excused myself to the restroom and cried. I don't think I've ever gotten over the betrayal I felt right then.

Forward to 1998. I am trudging through the mud for a job interview in a temporary trailer. I am desperate and at the end of my rope. I could never guess I would be spending the better part of the next 16 years in the half-finished building occupying the same lot.


...And with that, I am back to today, feeling a lot like I did on that day in 1998. It's more of a quiet desperation still, but it's lurking there. I wonder sometimes if the past is really as happy as we make it seem in our memories, or if we just long for the innocence and not knowing unhappy truths and the way things turn out.

My memory is random. I cannot retain most of what happened yesterday, but something from junior high is as vivid as if it did happen yesterday. Sometimes it's as obviously important as high school graduation, and sometimes it's something seemingly trivial like helping someone air up their tire. I have long ago stopped trying to figure out how my brain operates. I am who I am.

I don't seek answers from these slivers of memory, because I am not sure they even contain any. I try not live inside of them, although the temptation is great at times. I tend to think of them as markers signifying where I have been and how far I have traveled. And the thing about any trip is, you can't spend too much time looking at where you've been or you'll never get where you're going.
Posted by C. Elam at 10:10 PM No comments:

I am of course familiar with Jim Stafford's eccentric hits like "Spiders and Snakes", "Wildwood Weed", and "My Girl Bill", and rather like them. But this past weekend was my first encounter with his first hit song, "Swamp Witch". It is amazingly atmospheric and spooky, and I cannot understand why it has been allowed to fall into obscurity. Perhaps because it doesn't fit with the later theme of his career? I dunno, but "Swamp Witch" is a song that genuinely gave me the creeps as I listened to it. Good stuff.
Posted by C. Elam at 11:23 PM No comments:

My interest in 1970s-era Marvel monster reprint comics is perhaps unreasonable, since they are usually kinda terrible. They do sport outrageous covers that promise wonders that the interiors rarely deliver, so that's a point in their favor. I dunno, I like that they encapsulate the "Marvel Age" when it was at its most exciting to me personally, while still being self-contained. The hodge podge of interesting artwork from previous decades compensates for the fact that the stories are...well, often not well-thought-out to be charitable.

Tomb of Darkness #18 arrives in our hands from the year 1975, no matter what the publication date says. It leads with something very interesting, a reprint that was less than 7 years old at the time. My understanding of the so-called "7 year rule" was that there was supposedly enough turnover for reprints to be considered unseen by a lot of readers after 7 years. Yet, here we have a Roy Thomas/John Buscema story that ran in Chamber of Darkness #3 (February 1970). The splash looks like a very inadequate stat, so there is probably some alterations there. The rest of the story is fine from an art standpoint, but is a bit lacking as an actual story. There are some of Thomas' trademark ideas, and it is somewhat self-aware of its deficiencies, but I would call it a more forgettable tale from one of my favorite writers.

(Quick aside: Chamber of Darkness and Tomb of Darkness are not part of the same numbering, though it seems like they should be. Chamber became Monsters on the Prowl, while Tomb continues from the title Beware.)

Next to the plate is a Jack Kirby/Dick Ayers story about the Sphinx being an alien robot named Shagg. Yes, really! It is delightfully over-the-top, with both Paris and New York getting absolutely leveled over the course of 7 pages. What makes it even more wonderful is the utterly preposterous wrap-up of the story, which honestly must be seen to be believed. And remember: "Cosmo-Gamma Electro-Magnetic Waves! That's the answer!"

The third and final story is...well, it may be one of the oddest stories I have ever encountered for a mystery book. It's just so tame, and doesn't even really seem to fit the theme until the very end. I don't want to say that much about it in case someone cares about being spoiled, but gosh, what an anomaly. Checking out the date, it appears to be from the very early days of the Comics Code, and maybe that explains it. Certainly, I can't think of a more sanitized horror comics story.

I know I tend to be hard on these old comic books sometimes, especially viewing them through the prism of being an adult in the 21st century. But the truth is, they entertain me more than almost anything else, huge flaws and all. That's priceless, and it's why I keep doing these reviews.
Posted by C. Elam at 8:42 PM No comments:

Things My Dad Would Never Believe About Me, Part 27

My dad loved him some Westerns. Me? Eh. I enjoy the iconography of cowboys (especially in strange contexts, like sci-fi settings or Japan), but the Western genre isn't one that has ever appealed to me. There's nothing wrong with it, but it's just not my thing.

In recent months, I've been delving into quotes on Facebook and Twitter, for reasons that may eventually become clear enough. Some of them really hit home for me personally. One in particular got my attention so much that I made a cover photo for it to put on my Facebook. I identify very strongly with this sentiment, and have actually experienced it. I may even be experiencing it right now.

The irony is that this quote is from Louis L'Amour, best known as an author of Westerns. Somewhere, Dad is laughing his ass off at me. 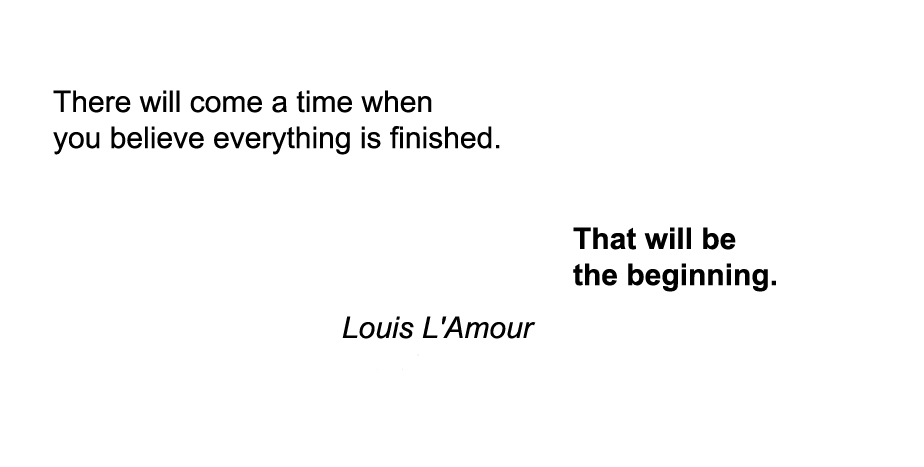