Don't Call It A Comeback 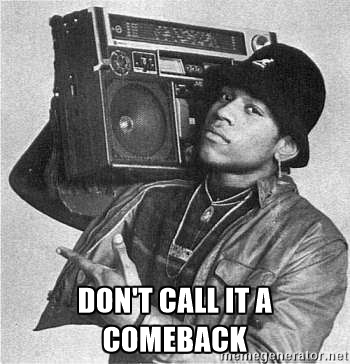 I guess I owe an explanation. When I said goodbye to this blog in January, I had every intention of it being permanent. I only hedged my bets on that because that's how I am. But I really didn't see any point in continuing and figured that was it.

A funny thing happened along the way. No, I didn't miss the blog. In fact, I kept up the sidebar just as I promised and checked in periodically. It was worse than misplaced nostalgia. I had wanted to concentrate on other things and gradually found myself doing...well, basically nothing for me.

I re-activated this blog with one mission only - get back to writing at least something every once in awhile. Even if all it is turns out to be an explanation of why I'm blogging. No more filler posts just to hit a quota that exists only in my head. It doesn't even matter if there's an audience, and, in fairness, that had diminished even before I hung out a CLOSED sign. This exists mostly to keep me in practice. If you want to read it, I welcome you.

Already, this has paid some dividends. I completed a couple of projects that I'm not sure would have gotten finished 6 months ago. I'm still waiting for one to become "official" and the other one is unfortunately stuck in limbo for the foreseeable future. No matter. I'm back in the game, at least for the time being.

It's not a comeback because I never really went away. But damn, it still feels good.
Posted by C. Elam at 11:11 PM No comments:

America vs. the Justice Society

I read the mini-series incarnation of AMERICA VS. THE JUSTICE SOCIETY back when it first out around 1985. Looking back, the fact that I managed to score all 4 issues at the time was a minor miracle since I was only 12 and had no guarantee of visiting the comic book store on a regular basis. So there are a lot of happy memories tied to this book.

That nostalgia, however, doesn't blind me to the fact that this mini-series has some issues. Cosmetically, it's all over the map with different artists, and the lack of continuity in this regard is a bit damaging. It does looks like there was a concerted effort by Howard Bender (penciller of #3 and #4) to emulate the layout style of Mike Bair (penciller of #2), since I cannot recall Bender laying out a page in this manner anywhere else. It's a good, valiant job, but Bender was already the THIRD main penciller on the book - to say nothing of pages by Rich Buckler and Jerry Ordway interspersed within the first issue.

A lesser problem, but one nonetheless, is that there is simultaneously too much and not enough going on in this story. Roy Thomas' goal in putting it together (as far as I remember) was to provided a review of the Justice Society's Golden Age exploits, and, to a lesser extent, their latter-day adventures as well. He does a pretty good job of this, though obviously the post-Golden Age stuff (especially the JLA/JSA team-ups) get less coverage. It's just a lot of ground to cover in only four issues. It gets a bit convoluted at times.

The "not enough going on" aspect is more or less a symptom of the fact that the driving force behind the mini-series is a Congressional hearing that looks and feels a lot like a trial. It's a bit far-fetched, but no more so than superheroes themselves. It's just a rather static set-up, and it's a testament to Roy Thomas as a writer that the book is as interesting and involving as it is. There are even some subplots that unfortunately get short shrift by the last issue. Again, just not enough space for everything.

One of the things that bothered me, then and now, about AMERICA VS. THE JUSTICE SOCIETY, was that it more or less ignores the developments with Bruce Wayne from the latter-half of the JSA's 1970s series and focuses instead on his vendetta against his former teammates. That got explained away, but Thomas either missed this development or chose to acknowledge it. It feels...strange, especially since the earlier comics were not even particularly old at the time.

There's also the little matter of the so-called "Batman Diary" that serves as the MacGuffin of the whole story. You see, Alan Brennert's "The Autobiography of Bruce Wayne" had appeared in THE BRAVE AND THE BOLD less than a year earlier, and it was also built around a memoir written by the Earth-Two Wayne prior to his death. Even by comic book standards, it's kind of hard to swallow that Bruce Wayne wrote two such books, but there's no way they can be the same one based on their contents. It seems an extraordinary coincidence that the same plot device would appear in two wildly different versions in two different stories. It's enough to give you pause, though I do believe Roy was working on his story before the Brennert one saw print.

DC collected AMERICA VS. THE JUSTICE SOCIETY in a trade paperback edition not that long ago. I picked this book up since I've been in a bit of a JSA mood of late. Though it suffers in omitting Roy Thomas' dated but still vital annotations, it's a nice book and fairly inexpensive. It even corrects an error on the cover to #2, and while I may be the only person in the world who cares, it's much appreciated.

I had some trepidation in revisiting AMERICA VS. THE JUSTICE SOCIETY, but I liked it just fine. Of course, I'm a big fan of both Roy Thomas and the Justice Society, so that should probably be taken into account. YMMV.
Posted by C. Elam at 9:48 PM No comments:

Tales of the Batman: Alan Brennert

In reviewing the history of this blog, I am nonplussed to find that there are zero result for the term "brennert." How, I ask myself, is this possible? Is the search just missing something? Or did I really go 7 years without mentioning some of my favorite comic book stories of all time?

I won't go into a lot of detail on Alan Brennert's background here. If you are so inclined, you can find out more about him and his impressive career here and here. What's important for our purposes is that I realized as soon as I read his Batman stories in the 1980s that they were among my favorites. I am not alone in this thinking. Alan Brennert's comic book work is justly revered, which is even more astonishing when you consider how few comics he actually wrote.

Though Brennert's work has often been reprinted, it had long been a dream of mine to have ALL of it collected between two covers. I even expressed this wish to Mr. Brennert himself, and while obviously enthusiastic about the prospect, he was skeptical at the chances of it happening. He wasn't a big enough "name" to carry such a book, he reasoned, and besides, he wasn't even sure if he was remembered by DC Comics at all.

But in a surprise move for those of us on the outside, TALES OF THE BATMAN: ALAN BRENNERT was solicited earlier this year. And despite its title, it *does* reprint ALL of Alan Brennert's stories for DC Comics. True, a Wonder Woman two-parter he plotted for Marty Pasko is omitted, but that one doesn't even feel like it's part of the same body of work. Brennert's Deadman tale from CHRISTMAS WITH THE SUPER-HEROES is included though, as is a truly fantastic Black Canary story from SECRET ORIGINS. So this collection is essentially "complete."

Ahhhh, but if Batman is in the title, he must be the main draw. Brennert made quite the splash when his first story as a scripter was chosen for the lead slot in DETECTIVE COMICS #500. This was followed by a series of team-ups in THE BRAVE AND THE BOLD, including a Batman/Catwoman pairing I have often cited as my favorite Batman story and one of my favorite stories ever. Finally, several years later, there was BATMAN: HOLY TERROR - a Prestige Format one-shot and an early "Elseworlds" project. Oh, and a short meeting of Batman and the original Green Lantern entirely in black and white rounds out the chronicles of the Caped Crusader contained within.

And to be clear, everything in TALES OF THE BATMAN: ALAN BRENNERT is outstanding. I am less of a fan of HOLY TERROR than I am of the rest, but that has more to do with my personal taste than quality. It also helps that these stories are blessed with outstanding art from such luminaries as Dick Giordano, Jim Aparo, Joe Staton, George Freeman, Norm Breyfogle, and Jose Luis Gracia-Lopez. It's an outstanding package and one I highly recommend to anyone interested in comics.

I had been pretty much out of comics for the last couple of years, but this book sort of lured me back (tentatively) into the fold. To make it even better, it came out around the time of my birthday, and was one of the nicest presents ever. You can find the book on Amazon here.
Posted by C. Elam at 10:10 PM No comments: 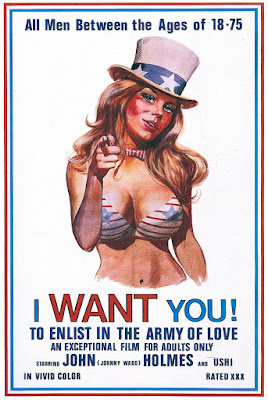 Sayonara ('Til We Meet Again)

I wanna keep this brief, but that's never been my strong suit.

If you've been following for awhile, you probably know I've been deeply conflicted for the better part of two years about continuing this blog. In reviewing the past year and a half of entries, I realized something - I really don't have anything I want to say here anymore. This isn't an indictment of this blog, or my audience, or even blogging itself. It's just that after over 12 years of doing this sort of thing (7 of them here), my interests have drifted in different directions.

To be clear, I'm not deleting this blog. It will stay up as long as Google sees fit. I'm pretty proud of it as a body of work, and I'd say well over half of it is what I wanted it to be. But I don't have any plans right now to update it further. Maybe that will change in a few months. Maybe that will change in a couple of years. I'm leaving that option open. Trust me, you'll be the first to know.

Also, I am not going away. You can still find me in the following places:

Twitter, for the occasional "wisdom" you have found here.

My Tumblr and DeviantArt pages, though I am not actively posting on either at this time. Hopefully, that will be changing in the months ahead.

My heartfelt thanks to everyone who has read, commented on, or just visited this blog. You have made it all worthwhile. I will still be lurking in the corner, occasionally messing around with the sidebar links or other such business. But for now at least, I am signing off here.
Posted by C. Elam at 8:15 PM No comments: