Ringing Out The Year With Gift Art!


raffle- velvet by kennasaur on DeviantArt

I recently was one of the winners of an art raffle by kennasaur. I asked her to draw Velvet Verity. I think we can all agree the results are smashing!

I was also the lucky recipient of some holiday art from Wandering Kotka. However, given that this art is most assuredly NSFW, you will have to view it on my Tumblr. Nuff said?

IT'S ALIVE THIS CHRISTMAS! 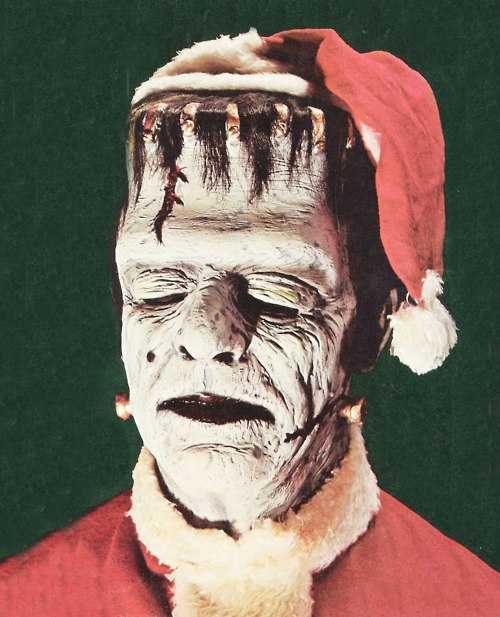 HAVE A COOL YULE FROM YOUR HOLIDAY GHOUL!

No no, not with this blog. As you can see, the blog is still kicking against all odds. In fact, I think I've finally decided what to do here. But that will be a topic for another day. Spoiler though - I'm not closing it permanently.

This post is here because I am celebrating. You see, in September, I decided to embark on the Captain Satellite Tumblr Project. I wanted to create a place for the Owariverse, and I wanted to use it to make a fresh start. The evolution of my fictional world has been filled with starts and stops, and as a result, there were plenty of things about it that I found wanting. It has long been my desire to try to set things up in a way I found artistically satisfying.

The problem was that making such fixes as you go is terribly awkward. Please see the fact that I have established things on this blog that blatantly contradict the book I published of those characters in 2011. So I've been putting a lot of bandages on a continuity I was making up as I went. And to be honest, much of what had been written was pretty sparse in the detail department.

The Tumblr account was exactly the remedy for what ailed the Owariverse. Taking this new start as an opportunity, I declared that I was blowing up everything and putting the pieces back together again. Of course, to do that, I had re-examine every single profile for my world. And that was, uh, a lot. Seventy-eight (78), to be precise.

The first order of business was sitting down and examining what I had and consider how I wanted to go forward with each character. Because, in truth, I had fallen victim to the idea of throwing together profiles for any supporting character who popped into my head semi-formed. A lot of them only merited two or three sentences. If I wanted readers to care about these people, I needed to care enough about them to tell their story in a little more depth.

If you mosey over to the new Profile Page, you will see 60 entries there (though most are not actually live). Six of those do not exist in the Owariverse Encyclopedia I compiled here. Another merges what had been two separate entries. So yeah, I scrapped over 20 profiles in this new revamp. Most of those characters still exist in some form or another, but I decided I didn't have enough to say about them to warrant an individual entry. I can't say this is the way it should have always been, because it's taken me years of trial and error to get my material and my ability to the point I am today.

ANYWAY, I decided prior to launch I needed to work out all the individual profiles for these characters. I needed a clear idea of how they related to one another and the bigger universe they inhabit. But...60 profiles? Some could be rewritten, but in other cases, I was almost starting over. A few times, I was building a character from the ground up. It seemed daunting. And I'll be honest, my track record in recent times hasn't been great. Two abandoned short stories, a shelved novella, a blog fallen on hard times -- it even took three additional years after wrapping Return of Jetman to stagger to the conclusion by completing the notes.

Today, I did it. Sixty profiles are in the can and ready to go. Nine have already been posted. The remaining fifty-one await their accompanying art. That part will happen at its own pace. But in approximately three months time, I managed to achieve a personal creative goal I had set for myself. The results are some of the most satisfying works I have ever created. I am pleased.

Allow me a moment to take a victory lap for finding success amidst much failure this year. Meanwhile, Captain Satellite boosters are advised to bookmark and/or follow the Captain Satellite Tumblr. If you don't, you are missing out on such stuff as Muttnik the Satellite Dog. And that would be a pity.
Posted by C. Elam at 9:55 PM 2 comments:

"Not sold in NYC" 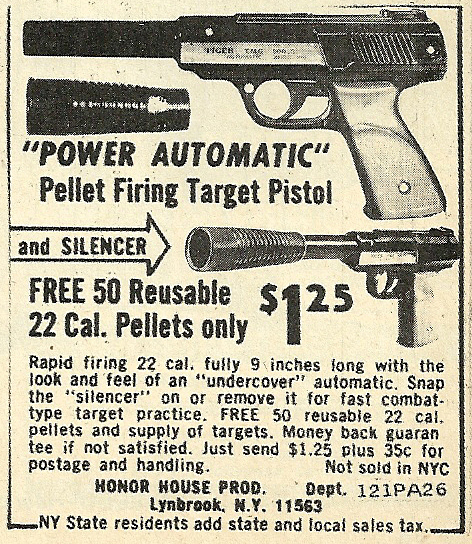 I scanned this for Kirk Demarais on Twitter a couple of weeks ago, and it seemed like the sort of thing that needed to go here, too. It's an ad from the June 1974 issue of the men's magazine BACHELOR that demonstrates that Honor House Products also sold guns through the mail. Pellet guns maybe, but still, yeah. And do note the disclaimer that gives this entry its title.

For the record, I was reading this magazine for the, uh, articles.
Posted by C. Elam at 11:56 PM No comments: