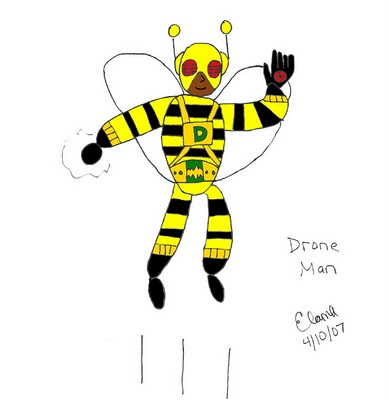 Everyone at MTI knew that Danny Graham was a technical whiz. They also knew he was a total flake. Despite being a certified genius, the only one of his graduate student colleagues who even deigned to associate with him was Mortimer Kane. And Mortimer was just as lacking in social skills as Danny.

Things started getting interesting for Danny when his friend Mortimer was transformed into the creature who became known as the Blue Behemoth. Kane's attitude changed along with his appearance, and this worried Graham. This so-called "Blue Behemoth", his formerly mild-mannered friend, was going off and taking lots of crazy chances. Danny designated himself the Behemoth's watchdog, but keeping up with the big lug proved to be no easy task. Danny Graham decided that the best way to handle his problem would be to create a super identity of his own, based on his affinity for gadgets and gizmos. And bees.

Thus was born Drone Man! OK, not the most awe-inspiring superhero name. It points up the fact that, while Danny has a good heart and brains to spare, he falls a little short in the sense department sometimes. In fact, the only reason he even settled on "Drone Man" was because Blue Behemoth managed to talk him out of his first choice. The blue-furred man-beast didn't think "The Bumbler" would strike anyone as impressive.

Drone Man's uniform is equipped with, but not limited to, the following specs : body armor, insulated helmet, two-way radio antennae, multi-purpose compound lenses, anti-gravity boosters, navigation wing pack, and sting beam disc system. So you see? He has the skills to create a dynamic and powerful set of gimmicks; he just can't come up with a catchy name for himself. That's the way it goes sometimes.

Drone Man joined Blue Behemoth in his crimebusting, and the pair earned considerable praise for their good works. He also assisted Kane in creating a super alter ego for reporter Roxanne Prize. Drone Man was one of the founding members of the Invincible Alliance, and is considered among the core members of the group. When not out doing the hero bit, he can usually be found at Alliance HQ, still doing his best to keep Blue Behemoth out of trouble.


Drone Man has gone through various incarnations and name changes over the years, but I've always been partial to having a bee-themed hero in my lineup. Why bees? I have no idea, but it seems right to me.

Drone Man as he currently exists owes a lot to the Steve Ditko version of the Blue Beetle. There are traces of other insect-based characters in his genetic make-up, but nothing so obvious that it stands out to me.
Posted by C. Elam at 6:54 PM