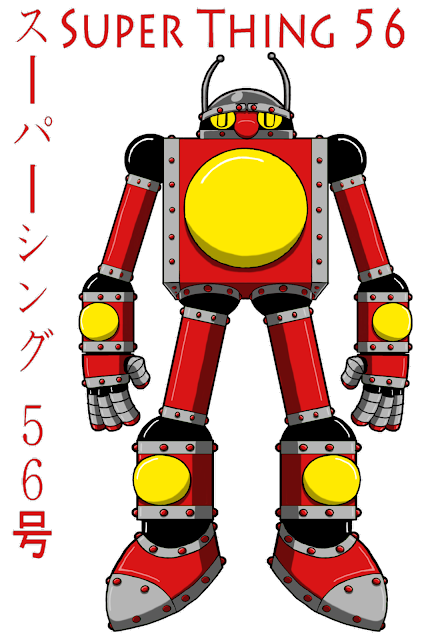 Super Thing 56 (スーパーシング 56号 Sūpāshingu Gojū Roku-gō) is both a parody of Tetsujin 28-go/Gigantor and a revised and updated version of a robot called “the Thing” which appeared in a Blue Tracer story published in Military Comics #12 (October 1942) by Quality Comics. (There’s also a little Devo in there.) He was invented by Dr. Hikari Jono (条野光博士 Jōno Hikari Hakase) and is controlled by Japanese schoolgirl Sakiko Jono (条野さき子 Jōno Sakikō). You can just call her “Saki” (さき) for short.

Based on “the Thing” created by Fred Guardineer, which is now in the public domain. “Super Thing 56″ art and character © Pete M. Kowal.
Posted by C. Elam at 9:26 AM