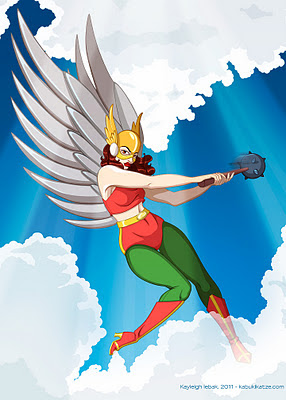 I've asked Kabuki Katze to do numerous commissions for me over the years, but they have almost always been of characters I had either created or shepherded through most of their existence. Hawkgirl is clearly not either of those things. So why?

Well, I have always liked Hawkgirl. I especially love the Golden Age Hawkgirl, the original incarnation of the character. She was (I believe) the first girlfriend who transitioned into the role of superheroine. Roy Thomas did some wonderful characterization with her in All-Star Squadron while I was reading that book. In fact, Roy was the first writer to use her in her costumed identity since the Golden Age.

Though I think the Silver Age Hawkgirl design is great, I vaguely resent it retroactively superseding the Golden Age style. Due to the vagaries of DC rewriting their continuity all the time, it was declared at one point that Shiera Sanders Hall was both the Golden Age and Silver Age Hawkgirl. As a result, the more familiar outfit originally identified with the Thanagarian heroine (seen in the Justice League cartoons in that form) became the default Hawkgirl outfit.

I had been thinking about Hawkgirl and how much I wished she had made even a token appearance in costume during the All-Star Comics run that I love so much (she does appear as Shiera a few times). I asked Kabuki to do a picture of her as a result, but specifically requested the Golden Age, Earth 2 version. That meant she would have:

There were other references, but the main one was this illustration done by Steve Rude for DC's mid-80s Who's Who series. Of course, Kabuki was given the flexibility to do certain things on her own. You can probably pick those out yourself.

I am quite tickled with the results of this commission, and I do believe Kabuki is, too. Why not go peep out her page for it on deviantArt while you are at it?
Posted by C. Elam at 7:59 PM