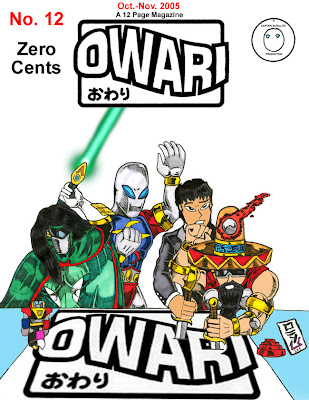 
In celebration of OWARI's 10th anniversary, there will be a new issue of the fanzine! Yes, OWARI #12 will be coming out in the latter half of 2005. This issue promises to be the best one ever. Why? Check out these contents :


Plus more surprises! So be on the lookout for OWARI #12, coming to a mailbox near you! Assuming you want it, of course.

Before we begin the review proper, I would like to yield the floor to the 2005 Christopher Elam. This is what was written in the final installment of The Beginning of "The End" in OWARI #12. Take it away, 33 year old me!

It’s hard for me to believe that it’s been 10 years since the first issue of OWARI. I’ve published 11 issues during that decade, along with a couple of other related publications. When I wrote the editorial for #11 back in 2002, I promised that I had plenty of ideas left for OWARI. While that was true, I encountered various technical issues in producing it that left me discouraged with continuing the fanzine format. Couple that with a less-than-enthusiastic reaction, and I decided that my efforts would be better spent in pursuing other things. I decided to shelve the fanzine version of OWARI permanently.

So, why the obvious change of heart? Well, I don’t like to leave loose ends if I can help it, so I wanted to give OWARI a proper goodbye instead of just letting it fade into obscurity. This 10th Anniversary was looming on the horizon, so it seemed the right time to produce one last fanzine and send OWARI out in style.

This is the final issue of OWARI. I’m not saying that I will never produce another issue, but there are no plans at this time for any more of these missives from what I whimsically dubbed “Captain Satellite Productions.” That doesn’t mean there won’t be plenty of other ways to get your OWARI fix (see end of issue).

Special thanks go out to OWARI veteran Lewis Smith for the front cover and OWARI newcomer Kabuki Katze for the back cover. I also want to be sure to thank everyone who has taken the time to read OWARI through the years, and those of you who actually deemed it a worthy place to share your work. All of you have made the untold hours I spent working on this mad dream worthwhile.

Wow, already a lot of words on this issue. Let's see if I can make the review itself concise. Yeah, I'm not betting on it.

I stayed busy enough on Return of Jetman in 2003 that there really wasn't a void created by OWARI's absence. I even began blogging regularly by the end of the year at my old LiveJournal. Which was a good thing, because 2004 had its share of ups and downs.

By the time 2005 rolled around, I was on the upswing. In fact, I'd call the first 9 months of the year really productive and creative. Plus, I'd also made plenty of new friends. In the middle of all this, my thoughts returned to OWARI and how it had been left without a proper conclusion.

Since 2005 marked the 10th anniversary of OWARI, I decided I'd do one more issue to tie things up. But there would no fighting with the copy shop or a cranky word processor this time. Oh no, OWARI #12 would be entirely a product of the computer.

Let's begin with that cover. For once, I actually COMMISSIONED Lewis Smith to come up with a cover! He decided to create a homage to the cover of All-Star Comics #37, uniting various elements from OWARIs past. I did a roll call of this image right here. Taking Lewis' lead, I mimicked the layout of the JSA cover, adding a bullet that resurrected the "Captain Satellite Productions" name and including the tongue-in-cheek "Zero Cents" price.

As noted in the promotional piece, both the front and back covers were presented in color for the first time. I used photo paper to give them something closer to a coverstock feel. The back cover was the figure element of Green Wyvern seen here.

When I first wrote about OWARI #1, Kabuki Katze mentioned that she missed the fanzine era. I wonder if she remembers being a part of OWARI #12? Neither her back cover nor the "Devil Girl from Mars" picture I used were originally created for the 'zine, but they definitely make her part of its legacy. I'm happy I found a way to include her in my fanzine going away party.

Another thing that makes me happy is the fact that I managed to finally make an OWARI with double-sided pages! WOO HOO! But seriously, this was always a sore spot for me, and I was able to correct it by printing the issue myself. Never has something so trivial been so satisfying.

The issue lead off with a feature on Big Bang Comics that is essentially a supplement to the massive article from #8. I mostly reviewed Ultiman Family #1, but gave some space to the still-upcoming RTA: Personality Crisis, Protoplasman, and the possible future of Big Bang. Well, it turned out to be a return to self-publishing, but that was still unclear in 2005.

Holy smokes, the rest of this issue's contents will go by fast. Alright, so there was the inked Jet Phoenix by Lewis Smith seen here, the original version of this humor piece titled "If The Internet Had Existed 70 Years Ago" adapted from my LiveJournal, the aforementioned Devil Girl From Mars pic by Kabu, and this bit of wisdom from EL BEARDO. I wrapped up with an update on the status of ROJ and a "meet the contributors" page I called What Are They Doing Now? in self-effacing style (a little GHIDRAH THE THREE-HEADED MONSTER in-joke there).

My biggest quibble about this issue is the fact that it's still pretty thin as far as content goes. Much of what it does include is kinda self-referential. Given the purpose of OWARI #12 even coming into existence, perhaps that is to be expected. I just wanted it to be better.

My goal for OWARI #12 was to promote the heck out of it starting in October. Then a little something named Hurricane Rita came along and disrupted what had been a great year until then. I was without power for about two weeks, but frankly, that was the least of my worries. My life was thrown into a massive upheaval, and by the time it had settled down in 2006, well...OWARI #12 didn't seem very timely anymore. It sort of came and went without much notice. I can't remember exactly how many copies are in circulation, but it may be the lowest total of any fanzine I published.

It's a shame circumstances derailed my grand plan for OWARI #12. Still, I'm glad I did it, and glad I got both Lewis and Kabuki involved in it, too. At the very least, it served as a fitting endpoint for all that had come before it. After the disappointing results of OWARI #11, the 'zine deserved to go out on a high note.

This concludes our study of my fanzine output. Tune in tomorrow when I try to put the whole business into perspective. Maybe.

(The coincidence of this pre-planned article going up while the eastern United States is dealing with Hurricane Sandy's devastation is not lost on me. Good thoughts go out to all those folks affected by nature's wrath.)