Record albums sometimes list credits that can leave you scratching your head. Take the one in this entry's title. It is an acknowledgment printed in the Blue Oyster Cult LPs Spectres (1977) and Some Enchanted Evening (1978) and dutifully reproduced ever since. Both of those albums, as you might have guessed, feature the BOC signature tune "Godzilla".

Notice it says nothing about Toho there? My understanding is that Toho and BOC have some sort of deal (possibly brokered by Henry Saperstein back in the day?), but I don't know any specifics at all. However, it's interesting that BOC continues to perform "Godzilla" to this day, and Toho is never listed in the legal niceties.

Back to the credit for "AA Wonderland Records." Why? Well, this is why. 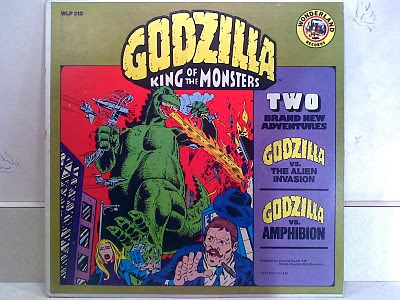 This gives a capsule history of Wonderland Records, and the reason for the designation "AA Wonderland Records" in the liner notes. Wonderland had a deal to put out a children's record with Godzilla (in 1977, no less, with Marvel's Godzilla #1 cover) and I would guess CBS/Columbia paid them a fee for usage to smooth over possible legal difficulties. Or maybe there were legal difficulties, and the fee came about as a result. I don't know - I've never read anything about it as far as I can remember.

I do like the wording of the credit, which makes it sound as if Godzilla is a guest artist on the records. And hey, who's to say he isn't?!?
Posted by C. Elam at 9:48 PM