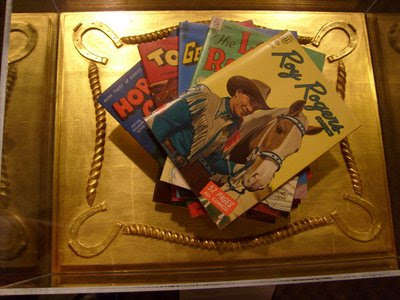 In January, I visited my gal pal Sara, and we took a trip the Phoenix Art Museum. One of the pieces we saw was Gary Erbe's "Cowboy Comics" pictured above. This is what the exhibit had to say about this 1996 piece.

This sculpture displays Erbe's affinity for optical trickery. In the style of trompe l'oiel, a French term meaning "to fool the eye", Erbe attempts to convince the viewer that this is a real stack of 1950s comic books. In truth, they are made of bronze and painted to appear authentic. The "comic books" rest on a gilded pedestal, adding to the novelty of the work, as it seems to venerate such everyday objects. Erbe's close attention to detail, including the use of real staples on the comics' bindings, adds to the life-like quality.

A self-taught artist, Erbe is drawn to subject matter from his childhood memories and American popular culture. He believes that common objects are universally understood and appreciated.

I'm not going to comment on the loftier interpretation of the work offered above, as you can take it as you wish. I will say, however, that I feel the photo of the piece adds to any perceived illusion. Under a reasonable amount of scrutiny, you can detect that these aren't real comics. That doesn't detract from the impressive skill it took to duplicate them in the first place.

Because it's what I do, I tried to find out which comics Erbe used as models for his work. It turned out to be remarkably easy, because the artist's keen eye led him to reproduce many details that might have been lost in lesser hands. The visible comics recreated in the work "Cowboy Comics" are :

Go check out those covers and compare them to Erbe's loving homage to them. Then you can visit his site through the link in the first paragraph, to see more of his fantastic work. You won't be disappointed!
Posted by C. Elam at 10:41 PM