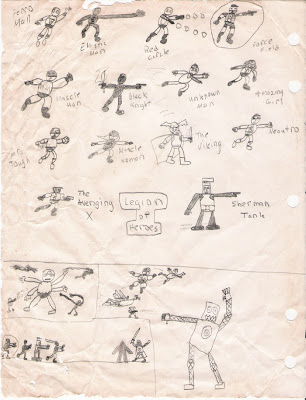 Well, here's a REAL blast from the past. I figured I should probably scan this one before it disintegrates entirely. So you, my lucky followers, get to hear the (very truncated) history of the "Legion of Heroes". Gosh, isn't that an original name? I'm so creative sometimes!

The Legion was probably my main conglomeration of characters in those early days of childhood. In fact, the only thing that kept them from being more important was that I churned out dozens and dozens of characters and groups and such. So I never really concentrated on any of them for very long. Which is a pity, in that the Legion has some decent superhero archetypes running around. Of course, much of it is just me shamelessly riffing on established characters for my own. Hey, at least I'm going to be up front about it!

Let's look at the Legion of Heroes membership.

Ferro Man : The "big gun" of my superhero lineup. Armored genius, but stuck in his power suit (or tragically disfigured, it changed). He was a cross between Iron Man and Ferro Lad of the Legion of Super-Heroes. Even his costume is derived from Ferro Lad. Through evolution and merging with a couple of separate characters, he more or less became "Captain Satellite", the main hero of my current "universe".

Elastic Man : Your obligatory stretchy superhero. Was his costume meant to be black, or was that just to indicate shading? I have no idea - I have never found a color picture of him.

Red Circle : An adventure hero-type who developed the power to shoot out energy in the form of...red circles. Yeah, a bit on the nose as far as powers go. He also had a sidekick at one point named "Reddy" (I am very sorry). Remind you of the Japanese flag, or the sentai character Battle Japan? Well, his design came from a "Captain Japan" that appeared in Marvel's Fun & Games puzzle comic.

Force Field : I honestly don't even remember this guy. Other than the obvious, I'm at a bit of a loss. There he is, and yet he doesn't ring a bell.

Muscle Man : Every group needs a big strong guy. MM is my completely generic strong guy type. Was his emblem on a leotard, or a tattoo? I can't remember now.

Black Knight : Believe it or not, he is not ripped off from any of the many "Black Knight" characters in comics. I just liked the term, and, ignorant of those guys at the time, used it. He wielded an energy sword to go with his special armor (what, again?).

Unknown Man : God, I still love this guy. He is a ROBOT IN A SUIT. Quality! His design is clearly based on DC's Golden Age Sandman, a look that still fascinates me to this day. Unknown Man was super strong, could fly, and had laser eyes.

Amazing Girl : Amazing Girl is kind of a strange case now that I think about it. I'm pretty sure she was a telepath, and probably based on the Jean Grey Marvel Girl from early X-Men comics (they were being reprinted at the time in a book called Amazing Adventures). Funny thing is, her costume bore a passing resemblance to Menthor of the T.H.U.N.D.E.R. Agents and there was later a female Menthor in the revivals of that series. Amazing Girl predates those revivals, and I had never seen Menthor prior to them. Weird, no?

The rest of these guys (and gal) are the second string as far as I'm concerned. While the above characters comprised my early Legion in now lost drawings, these folks came along later.

Mr. Tough : Dear lord, I must have gotten this name from somewhere. It's TERRIBLE, and yet not the kind of thing I can see myself coming up with on my own. My best guess is that he was a strong guy near the level of Muscle Man, but with a "bad attitude". Or something.

Muscle Woman : I think I deserve points for my sheer audacity with her. Yes, let's give the strong guy a female sidekick! And get this - she's ALSO super strong! That outfit is sure tame by today's standards, too.

The Viking : Well, look at him. He's a viking. He has an enchanted sword. He has a dragon ship that flies. I'm sure he said "thy" and "thou" a lot. Probably derived from Odin in Marvel's Thor comics.

Neautro : My assumption is that I was shooting for "Neutro" here. I guess he had the power to neutralize (or is that "neautralize"?) things. What that precisely entailed is a mystery.

The Avenging X : A hero with no super powers and an interestingly-shaped head. Well, I seem to be trying to make it look like a mask by this point, but you get the idea.

Sherman Tank : Ho ho ho! A heroic tank robot guy. Originally based on the Shogun Warriors "Combatra" (Combattler V) mecha. I doubt that is apparent to anyone familiar with the robot.

My first thought when I looked at the bottom was that it was different cases of the Legion. A closer examination revealed different members confronting each foe. Was my first instinct correct? Or was this part of some grand adventure? You'll have to invent a time machine and ask me in 2nd grade, because I am sort of clueless now.

Panel 2 : Force Field, Black Knight, Sherman Tank, and Muscle Woman race to tackle a pair of baddies. The dude with the sword is, I am fairly certain, called the Conqueror. I have to say, I think his design is pretty doggone good even today. The amorphous blob fellow next to him might be my recurring villain the Black Terror (no relation to any other character of that name). The only trouble is that the Black Terror doesn't look like that in any other drawing. So I don't know.

Panel 3 : Unknown Man, Muscle Man, The Viking, and Avenging X take on a giant robot. If that guy had a name, it is lost in the mists of time. Most probably, he was just a "giant robot".

Where are Mr. Tough and "Neautro" in all of this? Urrrr...maybe watching the HQ? Ya got me.

I hope this particular little foray into my imaginative youth was worthwhile. I mean, look at it this way - I still sort of draw the same way, so it can't be TOO bad.
Posted by C. Elam at 1:37 AM

Email ThisBlogThis!Share to TwitterShare to FacebookShare to Pinterest
Labels: works