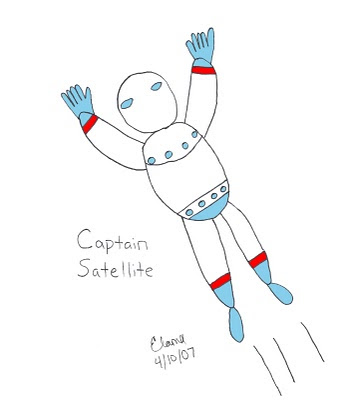 Paul Mann showed up in Major City a full decade ago, and quickly took it by storm. His shy, mild-mannered demeanor did little to blunt the brilliance which caught everyone off-guard. Before he'd hit his 21st birthday, Mann was a multi-billionaire.

Except who is Paul Mann? His background details are virtually impossible to verify. His one-time girlfriend, investigative reporter Roxanne Prize, took it upon herself to discover who he really was. She failed, and the resultant rift finished their relationship.

But there are other, more sinister forces that want to know what makes Paul Mann tick. The subversive group Third World has decided that they must have his knowledge to insure the success of their plans. But Paul Mann is not going down without a fight...

Paul Mann has channeled his super-scientific knowledge into the creation of the "Captain Satellite" suit. This unique lightweight powersuit allows him to function as a superhero - Captain Satellite. Though he has no formal training in the ways of adventuring, Mann has the able assistance of his bodyguard/girlfriend Shelly Ericson to give him pointers on combat skills.

Paul Mann has made no secret of the fact that he is Captain Satellite. But who is Paul Mann? That question...has yet to be answered.
Posted by C. Elam at 12:52 AM