A Nightmare Made Flesh 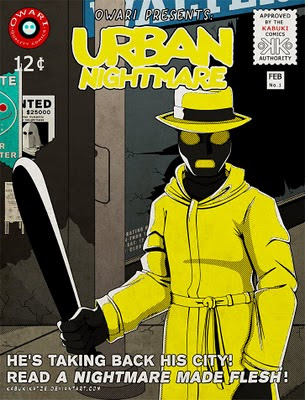 A Nightmare Made Flesh by Christopher Elam

I grew up in "The Minors." When I was 12, I saw my little brother Dennis gunned down in front of me. That's the kind of thing you never forget.

I've always strived to better myself, and make the most out of the opportunities I have in my life. Somewhere along the way, as I studied my people's African heritage, I left Jim Lawrence behind and found Xolani Shabangu in his place. But I've never forgotten my roots. That's why I moved back here.

The old neighborhood might be even worse now than when I left it. I've worked hard to be a civic leader and make a difference in people's lives, but there's only so much you can do when faced with such crushing poverty. That's especially true when the establishment would rather sweep the problem under the rug and pretend your concerns don't exist.

One evening in particular will be burned into my brain forever. My outreach session had just finished when a hail of gunfire filled the air. Drive-by shooters left 4 people dead. One of them was a 10 year old boy - the same age Dennis had been when he left for a better place.

Those gunmen had been trying to send me a message, but it was others who paid the price. As I watched a woman crying as she held her lost baby, I felt a despair I hadn't felt in a long, long time. Would those jackals really win? For a moment, I wished they had taken me, too.

I laid in bed that night, staring at the ceiling. I thought about Captain Satellite, and all the good he did. But even if Captain Satellite lived in Major City, he belonged to the world. Captain Satellite was too busy fighting terrorists, super villains, monsters, and aliens to have time to deal with the small stuff like muggers and pushers.

But what if...what if there was a super hero for the little guy? A hero who patrolled the streets and kept them safe. A hero who made a difference on a smaller scale. A hero who tried to prevent what had happened hours earlier. Why couldn't a man do that for his community?

Well, why couldn't he?

Three nights later, I saw a young woman hurrying home from a late night work shift, and I saw the predators lying in wait for her. But none of them saw me.

When those punks slithered out the shadows and I heard a switchblade open, I acted. I emerged from my hiding place behind them and told the girl to run away. As she obeyed, her would-be attackers angrily whirled to face me.

"You're a dead man!" one of them screamed. "Who do you think you are?"

My muscles tensed beneath my rainjacket, preparing for the first of many lessons I would be teaching on the streets. "I'm the Urban Nightmare," I seethed, "and I'm taking back my city."

No one has forgotten my name since then. Crime will never go away, but now the criminals look over their shoulders, too. Sometimes, that's the best you can do when faced with impossible odds.
Posted by C. Elam at 12:50 AM