Legendary Battles and The Wild West!

I promised more toy reviews for everyone, so that's what you're going to get! Special thanks to Jeff at VictoryBuy for making not only these reviews possible by hooking a brother up, but for reissuing these fine toys for a new generation! 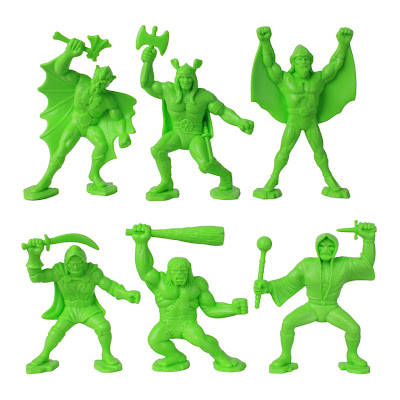 First, we have a set of fantasy-themed figures you may call "Legendary Battle," my friends. I have been banging the drum for these to return since I learned of their existence, so I'm pretty happy to have them. Though only green is depicted here, you will notice they also come in grey. They're about twice the size of your standard Army Man figure, but as my pal Thom pointed out, that just means they can be GIANT GODS if they associate with those guys.

These are really sturdy figures with a lot of nice detailing to them. What makes this even more stunning is EVERY ONE OF THESE MOLDS WERE RETOOLED. Why? Because they originally depicted Marvel Comics characters, and the original Tim Mee company decided to recycle them after the Marvel deal ended. The origins of a few of the characters are pretty obvious just by looking at them, but a couple of them are so disguised that you would never know who they originally were. I'm hoping to put together some comparison pics to demonstrate this in the coming weeks.

Besides flights of fantasy, we also have the return of an old stand-by: 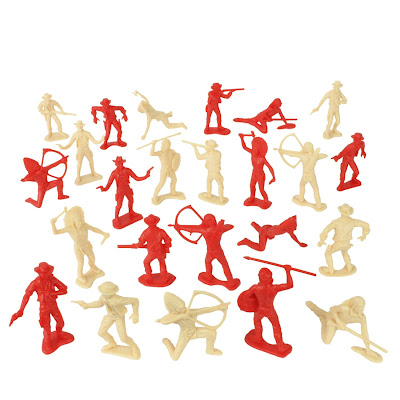 Yup, it's Cowboys & Indians, pardner. These are in roughly the same scale as the fantasy figures, which could lead to some...intriguing storylines if you were so inclined. They also have a lot of nice detail and good posing. Definitely a winner if you want some Wild West action in your toy life.

And since times are different now than they were back in the olden days (which can often be for the better), you don't have to feel limited by a strict "cowboys vs. Indians" dynamic. Since both groups comes in the same colors, you could choose to have good cowboys and peaceful Indians teaming to fight off nasty owlhoots and renegade Indians. Just a thought.

I didn't realize it, but I had these Western figures as a young child. I still have the cowboy who is drawing his shootin' irons in a box. It was a nice surprise to see him again and get in touch with a little personal history.

Just some gift ideas for the toy fan in your life...or maybe for yourself. Happy Playtime, friends!
Posted by C. Elam at 10:26 PM