As promised, we're going to take a look at some more recent commission work from our friend Kabuki Katze. Here we have Basil Whittaker. When I wrote about him a few months ago, this is what I had to say:

Basil Whittaker : Basil Whittaker is the British millionaire and daredevil adventurer who originally financed Paul Mann when he mysteriously appeared a number of years ago. Mann considers Basil his mentor, and the two have a surrogate father/son relationship that is perhaps so obvious that it led to the non-revelation that ended Paul Mann and Roxanne Prize's relationship. When not tending to his business interests or off on some boondoggle like circling the Earth in a hot air balloon, Basil is one of the foremost art collectors in the world. He specializes in pieces that are considered "grotesque" by the population-at-large.

As you might gather, a big dose of inspiration for Basil's look and life came from Richard Branson. 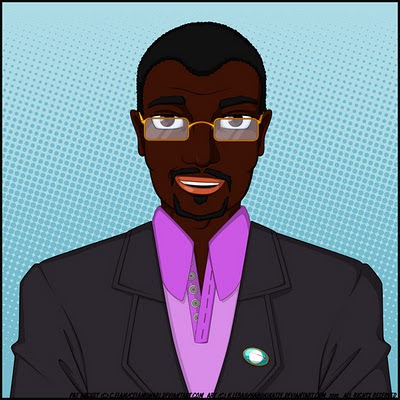 Now, this fine gentleman is Pat August. And who is Pat?

Pat August : Pat August is the president of Mann Creations, and the one who runs the day-to-day operations of the company. Though Paul Mann founded the company, and is the principal owner and CEO, it is Pat who keeps it humming along. He is probably Captain Satellite's most valuable and trustworthy confidante besides Shelly Ericson herself. Pat is involved with a number of charities and community programs both in his official capacity and as a private citizen, including serving as chairman for the Major City Council on African-American Affairs (MCCAA).

I'd like to deny that Pat August is influenced by Lucius Fox from Batman comics, but the origins of his character are actually lost in the mists of time for me. So, it's possible. However, Pat springs out of other things rather than a desire to imitate Batman.

Kabuki has expressed a desire to draw more guys, to better hone her abilities in that area. I think she did great work here in what I have designated "The Kabu Dude Project". If you concur, why not leave her feedback on her art account here and here?
Posted by C. Elam at 12:21 AM