I picked up a copy of Jack Kirby Collector #57 Wednesday and opened it up at random. What greeted me there was a double-page spread of Kirby pencils that I found so compelling that I almost HAD to buy the issue. It is a depiction of Arishem the Judge, one of the Celestials (among my favorite Jack Kirby concepts) from an early issue of Marvel's The Eternals. 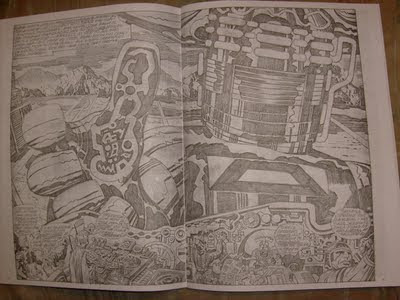 (Enlarge that. Go ahead, I dare you. See if your mind can stand how awesome it is.)

Here is the thing that I find most startling about that piece. For most people, it would probably take days. After they were done, they would probably kick back with a refreshing beverage as a reward for a job well-done. And in all honesty, a piece this epic would earn that right.

But Jack Kirby? Jack Kirby probably knocked that out in a single afternoon. And when he was done, he probably went directly to the next thing.

Kirby's entire run on The Eternals was reprinted in a pair of books not long ago. As for Jack Kirby Collector, it and many other fine publications come to you courtesy of TwoMorrows.
Posted by C. Elam at 12:01 AM