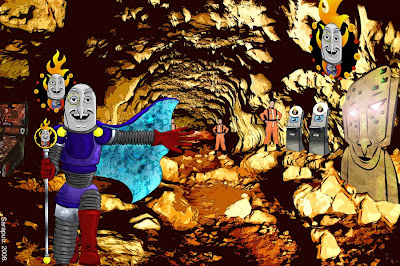 I talked a little about Dr. Diabolo back in April 2010. Here's a refresher on what the Notes from Return of Jetman have to say about the guy.

"Dr. Diabolo was originally a character I created to battle my personal superhero Captain Satellite. The unusual spelling "Diabolo" (not a typo for "Diablo", as a gag much later spells out) derives from the time in high school in which one of my classmates was singing the praises of the Lamborghini Diablo and couldn't quite pronounce the name correctly."

Of course, no one ever told me that there REALLY IS something called a "diabolo" (it is a juggling prop). But that's not important today. Neither is the fact further outlined in that prior entry, which is that the doctor has become essentially divorced from his roots in my superhero stories and is not considered part of the Owariverse. No, we're here to talk about the design of the guy.

Sara at Synthetic Platypus was the artist charged with bringing Dr. Diabolo to life. I was deliberately vague in the details in the story, but there were still a few things that needed to be there. One was armor, and another was a cape. Beyond that? It was open season. Still, I had some ideas.

When explaining the commission to Sara, I equated Dr. Diabolo to Dr. Doom. This was a very logical thing to do, yet it ended up being problematic for her. Why? Despite being a comics reader, Sara had never read any comics with Dr. Doom. The only version she was familiar with was the movie version. Which, as you may recall, is not exactly a guy in armor.

Once we got THAT communication breakdown fixed, we then came to the matter of references. I actually had a certain sort of look in mind for the armor, though it was a visual nod to a robot rather than a human villain. I was thinking of the robot from the movie serial THE PHANTOM CREEPS as a source of inspiration. I think it was an advantage that there was no color scheme involved.

So Sara got a photo of the robot (in fact, that still) to use as a starting point. I'm sure you can see the elements she used in her interpretation of Dr. Diabolo. I do enjoy the variations though. That helmet, complete with pointy nose, whiskers, and monocle(!), is far funnier than anything that was wandering around my brain. And it was Sara who included the snazzy pattern for Doc's cape.

Sara was a bit of an overachiever in putting together this piece, as you can tell. Some of it pertains to the story (Big Face, the Flaming henchmen), while some of it is just a trip to in-joke city (the MAVERICK pinball machine). I really dig this piece, as it gave me way more than I bargained for when I commissioned it. If you like it, why not check out both the ROJ site and Sara's art page?
Posted by C. Elam at 8:00 PM