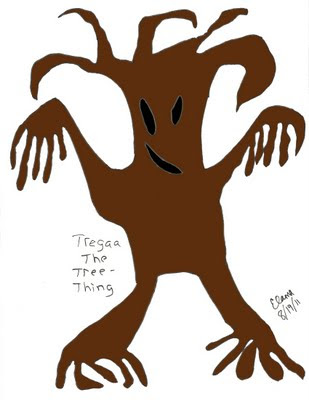 Theories abound as to the origin of the being that refers to itself as Tregaa the Tree-Thing, but none have been confirmed. And let’s face it, it’s hard to pry information out of a belligerent ambulatory tree if it doesn’t feel like sharing. All that is known for certain is that Tregaa appeared in western Canada and went on an impressive rampage before being subdued by Captain Satellite, Shelly Ericson, and a new weapon dubbed the Fire Chainsaw.

There was a concerted effort to gather the remnants of Tregaa after the battle, but it seems likely that at least some pieces of wood were overlooked. Will the intelligence of Tregaa the Tree-Thing persist in random splinters? Will the monster find a way to resurrect itself? You probably shouldn’t bet against it.


Tregaa the Tree-Thing springs from such roots (sorry) as Tabonga in the movie FROM HELL IT CAME and the Marvel monster Groot. In fact, hasn't Groot reformed? Possibly the only thing cooler than a tree monster is a GOOD GUY tree monster!

A word about Tregaa's face. In designing this guy, I was at a loss at first about the mug I wanted to give him. Then, I pulled something from the old memory bank. My house is filled with that sort of wood paneling that was very much in vogue during the 1970s. In my parents' bedroom, there is what I can only describe as a face in the paneling.

As a child, this illusory face ABSOLUTELY TERRIFIED ME. To this day, I still find it sort of creepy. So it seemed natural to incorporate "the face" into Tregaa's design.
Posted by C. Elam at 11:39 PM