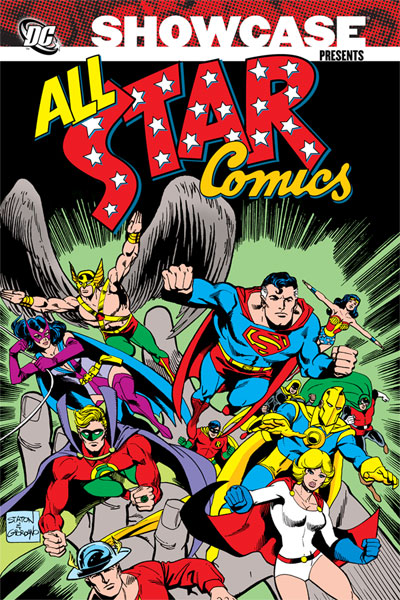 It's sort of interesting that my last comics-themed entry discussed my short-lived comics blog, because the period when it was most active was when the solicitation for Justice Society Volume 1 generated a lot of personal excitement for me. That book, coupled with Justice Society Volume 2, collects one of the touchstone runs of my comic collecting life - the 1970s All-Star Comics and its continuation from the pages of Adventure Comics. I love these comics so much, I even sent copies of the books to Kabuki Katze. I have been meaning to write something about them here eventually, and this entry will probably be the first of a few you'll be seeing.

DC Comics has seen fit to repackage the material as Showcase Presents All-Star Comics Vol. 1, which collects all the comics from the two trade paperbacks in one thick B&W book printed on newsprint. Because I am more obsessive about this particular series than most, I bought it. Besides, it gives me the opportunity to revisit these stories and discuss the merits of the collection for those considering buying it.

The following is my review of the technical aspects of this book. It addresses some of the shortcomings of the trade paperbacks from a collector's standpoint. From a READER standpoint, none of these things will detract from the experience.

Basically, this is a B&W version of the two trades, so if you go into it with that attitude, it works well enough. The art still looks sharp sans color. The weaknesses of the trades are still present (credits removed from the first half's tales, editorial notes altered or removed altogether, two recap pages dropped from an Adventure Comics tale), but this did not surprise me. Well, considering what IS present, the missing recap pages are a little bit of a surprise. More on that in a bit.

Now, if you are worried about the credits (perfectly valid), they are on the contents pages. That's a huge improvement over the trades, where they had to add a separate page to Volume 2. What interested me most about this book were the covers - the one on the front and the ones inside.

1) Contrary to the solicitations (and promo images), the cover is not one by Brian Bolland. Instead, it's a recolored version of All-Star Comics #74. I much prefer this choice, as it's more indicative of the contents and is one of my personal "icon" covers. It is the image that leads off that post. Neither of the Bolland covers appear.

2) Whoever colored Vol. 1 other than Drew Moore (I distinctly recall it was not Drew himself) chose to alter the colors on certain covers, whether by accident or design. I remember in particular the cover to #62 seemed to drop portions of the blurb due to the coloring blending into the background. Thankfully, this is not an issue here.

3) The biggest surprise of the book for me was the inclusion of the covers to Adventure Comics #461, #462, and #463! Well, the front covers anyway. The back cover to #461 was already in the trades, and it's included here, too. However, the back portion of the wraparound cover to #463 is not included (perhaps deliberately - no JSA). Neither are the covers to #464 (front or back), #465, or #466 included. None of these are particularly JSA-centric. If I remember rightly, the one that had everyone most up in arms was #462 and its shocking and memorable cover.

There you go. If you didn't buy the trades, this is pretty much the same presentation at a cheaper price in B&W on newsprint. It might be more attractive if you're on the fence. If you DO have the trades, I've listed the only significant differences I noted. I doubt they will influence anyone to buy, but you never know.

Unless you are like me, and need BOTH versions.
Posted by C. Elam at 7:34 PM