"Black Star and the Golden Bat" or "Golden Batman"

Speaking as we were of Tumblr yesterday, if you don't follow mine, you might not have seen this business. I don't know "Chad Edwards," but can only assume he is a reader of this blog based on his mention of THUNDER PRINCE. You may recall there was a post about that film back in 2010.

So anyway, I was unfamiliar with the movie titles he gave that are now the title of this post. As I mentioned in response to his initial query, I had seen the videos commonly referred to as "Super Batman and Mazinger V" and "Young Gu and the Golden Bat," but never anything by those titles. Well, given the circumstances, it's entirely possible one of those might be called 검은별과 황금박쥐 and the English titles I know are just free translations.

Curious, I plugged the above Korean text into Google Image Search. Lo and behold, what did I find? 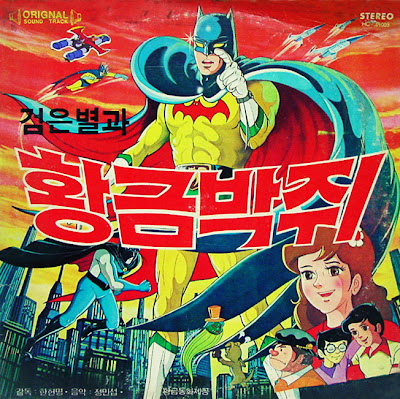 Actually, I learned a bit more. It seems there is a full-fledged cartoon version of this character to go with the live-action one I saw in "Super Batman and Mazinger V." Oh yeah, this is that guy. Despite not wearing Kamen Rider Black RX's henshin belt, and the lack of appearance by Castle Grayskull, I can't forget a dude who wears Batman's cowl matched with a yellow costume.

"Super Batman and Mazinger V" is one of those cartoon/live-action hybrids that is/was commonplace in Korean kiddie cinema. It is pretty terrible as I recall, but memorable in its own way. It sure looks like this 100% animated version has much in common with its brother. I mean, check out the ersatz Mazinger in the upper left corner! And according to Chad, it is WORSE than THUNDER PRINCE!